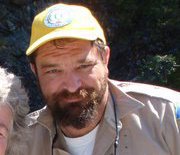 When CSLEA called the California Conservation Corps'(CCC) Ukiah Center and asked to speak with Conservationist and California Statewide Law Enforcement Association (CSLEA) member John Griffith, we were  told we  would have to line up behind CNN and Good Morning America!

Griffith is an internet hit after two young Corps members showed him a couple of dance moves and he suddenly stepped into frame and, basically, outperformed them.   The two young men had their "urban moves" on when their boss, Griffith, who appears to be more of the "country-western" type, took center stage and got  more than a standing ovation.  One Corps member tackled him with a "I can't believe what I just saw" bear hug!

Griffith was initially embarrassed by the video but then decided to post it on the internet at the request of CCC corps members who wanted their moms to see it.  The video was posted last August.

"It didn't get any hits," said Griffith.  Then, recently someone posted the video on a different website and within 12 hours, the video of this middle-age, conservationist busting a move with the young people he teaches, bumped up to 240,000 views.

"Yesterday (Monday)  I was planting grass plugs along Highway 20 and I was all excited the swallows returned.  That was four o'clock in the afternoon.  By five o'clock I was getting emails saying your video is going viral."  And now his phone hasn't stopped ringing.

Griffith is enjoying his "15 minutes of fame," and is taking advantage of the opportunity to shine the spotlight on the CCC and how valuable the program is for young people.  "I would love for CCC not to be a secret," said Griffith.  "It's such a great opportunity, it shouldn't be hard to find.  I should know, I was a corps member."

Griffith was a corps member in 1989.  He took on different work after that before returning to CCC as a seasonal temp worker and then becoming a full-time conservationist in 2004.

"I've devoted my life to reconnecting youth to nature and helping them to gain sustainable employment skills, " Griffith said.  "Hundreds if not thousands of youths come in for a year.  I get the opportunity to plant seeds, sometimes you get to see them grow.  I get emails from kids telling me they've graduated from Berkeley and thanking me.  I get emails from kids who say they are now raising their children to appreciate nature because of the things I taught them."

Griffith is also using his  unexpected "15 minutes" to talk about the book he wrote, "Totem Magic: Going MAD."   It is a fictional story about magical kids who protect endangered species.   According to Griffith all proceeds will be donated to the California Conservation Corps Foundation, Outdoor Afro and Wildlife Care Centers.  He wrote the book about a year ago and only about 500 copies have sold.  Today will likely change all that.

Griffith says he is scheduled to be on Good Morning America tomorrow and has been conducting interviews via Skype.  "Good thing I work with the  millennium generation," he laughed.

"There's no question he's dialed in," said Association of Conservationist Employees (ACE) President Jim Kastner.  "He gets these young corps members out and shows them nature like they have never seen it before and teaches them valuable employment skills."

So we saved the biggest question for last.  John Griffith, where did you learn to dance like that?  "It's funny, I've been in the woods most of my adult life," said Griffith.   "But I grew up in the city, in Fairfield and washed cars in Richmond, so I learned to break dance."

His motto?  "Balance professionalism and having fun, you have to when you're working with youths."

For more information about Griffith's book