A shoe sticking out from the ground.  A shallow grave.  A body covered in dirt.  Mendocino County sheriff's investigators have what looks to be a murder mystery on their hands and our California Statewide Law Enforcement Association (CSLEA) members who are criminalists in the Department of Justice are working to help.

A family out kayaking discovered the skeletal remains along the Eel river near Piercy in October last year, the day before Halloween.  Since then, a forensic anthropologist determined the remains were that of a man,  25 to 45 years old.  Detectives believe the man was the victim of a homicide, but no cause of death has been determined. 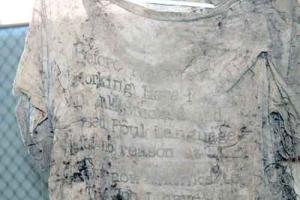 There are a few clues.  A rusty pocket knife, a shoe, long underwear and a t-shirt were all found in the gravesite.  The case has not grown cold but it has gone silent and where there is silence there is science.

"Often times we think of criminalists and their work solving active, violent crimes," said John Miller, president of the Association of Criminalists for the California Department of Justice (AC-DOJ) and DOJ senior criminalist.  "But our Missing Persons DNA Program (MPDP) is not only fascinating, repatriating the  remains of long-missing loved ones to their families is probably second in importance only to identifying murderers, rapists and other violent criminals still at large."

In homicide cases, identifying a body can lead to identifying a killer.  And that is what investigators in Mendocino County are hoping for.

Who was the man buried beneath the dirt?  How long had his body been there?  How did he die and did he die at the hands of another?

Did he have a sense of humor?  There was a  phrase on the t-shirt from the grave:  "Before I started working here I drank, smoked and used foul language for no reason at all.  But thanks to this job, I now have a reason."

Did the man have family?  Are they looking for him now?

"Criminalists are no strangers to this type of mystery," said Alan Barcelona, president of CSLEA.  "They receive cases from ordinary to odd ball, cases that are high profile and intrigue the public.  They are highly skilled in what they do and passionate about solving cases and bringing closure to families."

In April 2003, when a couple discovered a fetus along a Bay Area shoreline and one day later,  a woman's body washed ashore, California DOJ criminalists were put to the task of identifying what turned out to be mother and son, Laci and Conner Peterson.  It was a missing persons case turned murder investigation that dominated the headlines for years.  Peterson's husband, Scott, is now on death row for killing his wife and their son. 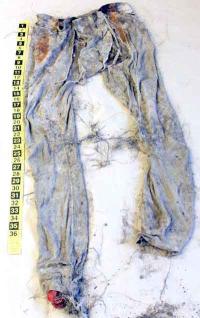 It was DOJ criminalists in the Missing Persons DNA Program (MPDP) who conducted tests on two bones discovered in the Sierra Nevada Mountains in late 2008.  The tests produced a match to American businessman and adventurer Steve Fossett.    Fossett was reported missing more than a year earlier when he and his plane failed to return from a departure.

Now, detectives in Mendocino County are asking DOJ criminalists to once again solve a mystery, to extract DNA from the skeletal remains found along the Eel river last October and possibly identify the body.  Identifying the suspected victim of homicide would allow detectives to bring closure to his family and possibly bring to justice, his killer.