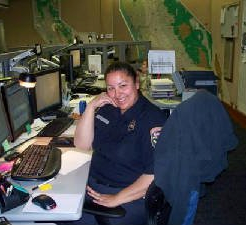 Ever since I was a little girl, I wanted to be a "voice from the little box."  I've "worked" for CALFIRE (known as CDF back in the day) ever since I can remember.  My dad was a Division Chief out of Pilot Rock Conservation Camp and would come home in his pickup truck.

Usually around 5:30pm every night, I could expect see him pull up to his parking space in front of our house.  I would run out there to welcome him home.  I'd usually hop in the passenger  side as he was telling the voice from the little box, "San Bernardino, 6506, 10-10".  Then he'd hand me the hand-held microphone and let me hang it up on the little hook. That was my big job and I did it well.

Growing up, I would love to hear fire stories from my dad and his friends.  The love they expressed for their jobs with this department was absolutely contagious.  I wanted to be a part of that.  Since I dislike the outdoors and appreciate the invention of climate control, I followed my dream of being the voice from the little box.

After high school and two years of junior college, I applied for dispatcher jobs everywhere.  CHP hired me in 1995.  That is where I intended to continue my career but when I became pregnant with my son,  I took a year off with the baby and one year turned into two before I decided to go back to work in 1998.  CALFIRE hired me at South Ops as a reinstated employee (LT).   It was a perfect match that allowed me to be a full-time mom all winter long till 2009 when I became a year-around Com Op.

I encourage all my fellow voices from the little box to keep in mind  those future Com Ops that might be listening to you from their dad's pickup truck.