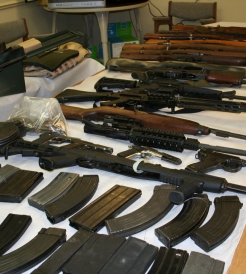 Senate Bill 140, which calls for more California Department of Justice (DOJ) special agents to tackle the enormous backlog of people on the armed and prohibited persons list was passed by the State Assembly Appropriations Committee by a 12 to 1 vote, today.

California Statewide Law Enforcement Association (CSLEA) Legislative Consultant Craig Brown urged committee members to pass SB140.  "Our members are the ones who do this important and dangerous work," said Brown.  "We urge your aye vote for this bill."

SB140, by Senator Mark Leno (D-San Francisco), appropriates $24 million to the DOJ from the Dealer Record of Sale (DROS) account to allow for more than 30 additional special agents to be hired for the Armed and Prohibited Persons (APPS) program.

Currently just 33 special agents are working throughout the entire state to remove more than 35,000 firearms from the hands of more than 19,700 people who are either convicted felons, convicted of a violent misdemeanor, placed under a domestic violence restraining order or determined to be mentally unstable.

"These are people, who by law, are not suppose to be in possession of firearms," said CSLEA President Alan Barcelona.  "The money is coming from a surplus in the DROS account and by hiring additional special agents to tackle the backlog, California becomes a safer place."

Because of a technical amendment, SB 140 now goes back to the Senate for a vote before it can be sent to the Governor.