The Effort To Arm Hospital Police Officers "Why are you putting these guys out there without the proper safety equipment?" - Alan Barcelona, CSLEA President 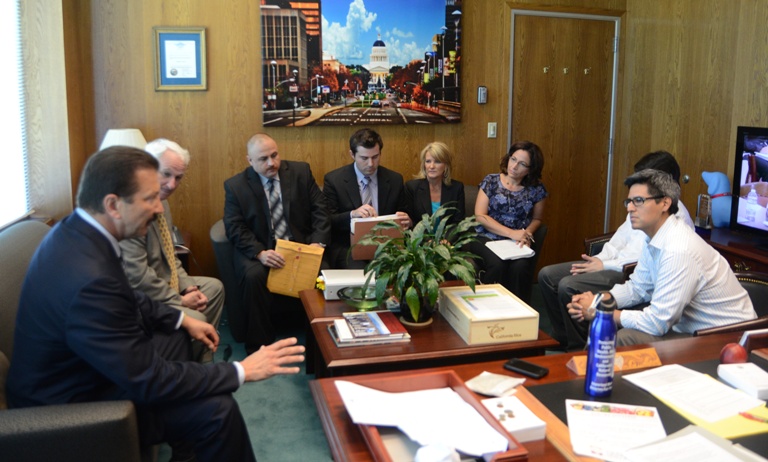 It happens every day, every afternoon and every night.  Sworn peace officers are sent out on their jobs wearing bullet proof vests beneath their police uniforms and badges, they drive marked police patrol cars with lights and sirens, their job is to protect and serve, but their department does not allow them to carry one very important piece of safety equipment; a gun.

Who does that? The California Department of State Hospitals (DSH) in five communities where violent, criminal patients are housed.   Many of those patients would be identified as inmates if it were not for the psychiatric treatment they receive as a result of committing a violent crime such as homicide, attempted homicide, kidnapping or rape.    At three of the five state hospitals , unarmed police officers transport these incarcerated forensic "patients" into the community on a daily basis for medical appointments, court appointments and to attend funeral services.

"That's why we met with Assemblymember Henry Perea," said Alan Barcelona, president of the California Statewide Law Enforcement Association (CSLEA).   "The decision to arm these trained, sworn peace officers, who are no different than your city police or county sheriff's deputies, other than they aren't permitted to carry a firearm on their duty belts, rests with the director of DSH.  After explaining the dangerous situation to Assemblymember Perea, he too, wants to know why?"

CSLEA emphasized that the patient population at the state hospitals is becoming much more dangerous and transporting such patients into the community with an unarmed hospital police officer  presents a significant health and safety hazard for the officers, patients, and the communities surrounding the state hospitals.

"On June 2, at Coalinga State Hospital, despite signs that indicate it is not a public hospital, a couple involved in a domestic situation in which one of them needed a doctor caused a raucous in the parking lot," explained Navarre.  "Unarmed hospital police officers were dispatched and found themselves next to this couple and the couple's car which had in it, a loaded shotgun, two loaded handguns, nearly 200 rounds of ammunition and more than a dozen bladed weapons. "

CSLEA asked Assemblymember Perea for his assistance in better protecting the hospital police officers so they can in turn better protect the communities they serve.  "We have been talking to the department a long, long time," said Barcelona.  "I don't want to bury one of these men or women and then have a new law named after them.  No family should have to go through that."

Assemblymember Perea agreed to contact the DSH director and request a meeting to explore why sworn peace officers at these hospitals are not armed.

Last year, Governor Jerry Brown vetoed AB 2623, which would have established a policy regarding the arming of hospital police officers,  stating the DSH director has the ability to do so.

"I am encouraged that Asssemblymember Perea is taking this issue seriously," said  Jimenez.  "Our fear, as unarmed police officers at state hospitals, is that someone is going to die or be seriously injured before the department of state hospitals seriously considers arming their officers.  There's no question we encounter weapons on the job, and in today's world of mental health issues and active shooters, it's inconceivable that a sworn peace officer wouldn't have a firearm on his or her duty belt.  It's standard equipment."