When a patient strangled psychiatric technician Donna Gross at Napa State Hospital nearly three years ago, a spotlight was shined on the growing population of violent patients who are sent to Napa State Hospital and four other state mental hospitals as a result of being accused or convicted of heinous crimes.

The reoccurring theme throughout testimony at an Assembly committee informational hearing held at Napa Community College October 9, 2013 was that  California's state mental facilities are becoming more like prisons.

"Many prisons have turned into de facto mental hospitals," said Assemblymember Marc Levine (D-San Rafael).  "The fact is, this hospital (Napa) has turned into a de facto prison."

Assemblywoman Mariko Yamada (D-Davis), head of the Select Committee on State Hospital and Developmental Center Safety, concurred.  "Are we turning our hospitals into more of correctional facilities?" she asked. 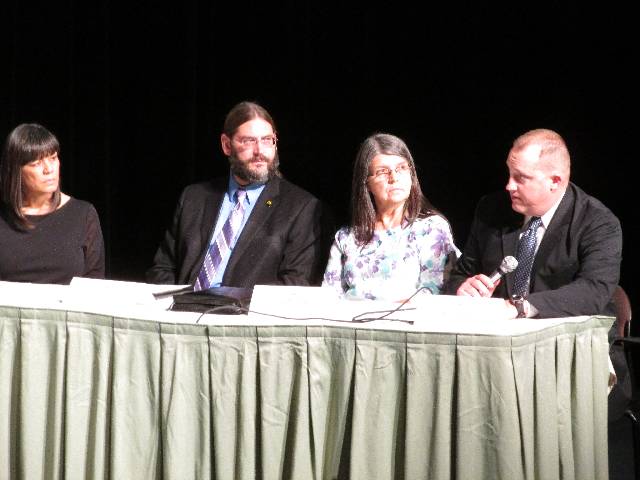 "Napa is seeing patients who have committed crimes such as murder, mass murder, rape, assault with  deadly weapons, attempted murders, armed robberies and gang related crimes," Johnson told the Assemblymembers.  "While these violent offenders are housed at Napa State Hospital, they are transported by one unarmed hospital police officer and one staff member to medical appointments out into the community.  Sometimes there will be two patients to one officer while on these transports."

As a result of Gross' death, safety and security improvements continue to be made inside Napa State Hospital, but little attention is being given to outside the facility where as many as 12 patients a day are transported by unarmed sworn police officers into the community for medical appointments at public hospitals and physician's offices.

"We have patients who are gang members, no different from prison gang members, who have called out and advised their fellow gang members to meet them at their doctors' appointments, putting our unarmed officers, staff members and community members in danger," Johnson explained.  "Napa State Hospital houses gang members who are heavily tattooed on their hands, arms, neck and face, making it easy to identify their gang affiliation and creating dangerous scenarios to possibly unfold inside the hospital and out in the community, putting everyone at risk."

Safety at state mental hospitals is being addressed because the forensic (or criminal) population is growing.  Dolly Matteucci, Executive Director at Napa State Hospital reported there are 980 forensic beds inside the secured treatment area at the hospital where the demand is bigger than the number of beds.  "The population and length of stay are increasing," she said.

In an 11-month period from October2012 to September 2013, Napa State Hospital recorded 82 patient to staff injuries in which the injuries were considered major.  In 2012, the hospital saw about 3,000 acts of aggression against patients and staff.

It is estimated that 90% of the patients housed in the state's five mental hospitals are "forensic" patients  sent to the hospitals by the criminal justice system.  While the Assembly  hearing  in Napa focused on Napa State Hospital, the scenario is similar at Atascadero, Coalinga, Metropolitan (Norwalk) and Patton State Hospitals.

"CSLEA, HPAC and hospital police officers are sympathetic to their concerns," said Ryan Navarre, CSLEA legal counsel. "However we cannot ignore the fact that as of 2010, 16% of the forensic patients at Napa State Hospital  had a most serious offense of homicide, 37% had a most serious offense of assault/battery and 11% had a most  serious offense of sexual offenses.  Do we want these patients becoming violent and  escaping into the community during transport?  Do we want them reoffending, hurting community members?  They arrived at Napa State Hospital via armed officers when committed, why are they transported to doctor's appointments and medical treatments with an unarmed officer who is a sworn peace officer  no different from Napa city police officers, Napa County sheriff's deputies or for that matter, the Napa Valley Community College police officers who are standing watch over this hearing today,  all armed."

The growing violence inside state mental hospitals has been depicted in the headlines.  Last month, a criminally committed patient beat to death another patient at Patton State Hospital.  The attacker told officers, "he didn't like the guy."  The attacker  had killed a patient at Napa State hospital, then was sent to Patton State Hospital after the homicide was ruled justifiable self-defense, only to kill another person inside the walls of a state hospital.

"It is just a matter of time until the violence and behavior occurring inside the state hospital spills out into the community while forensic patients are being transported," said Navarre.  “The murder of Donna Gross was a catalyst for change inside the secure areas of the hospitals, we are hoping the Department takes a proactive approach to the safety outside the secure treatment areas of the hospitals in hope of avoiding  another tragedy that causes a reaction for change.”

In discussing hospital police officers at Napa State Hospital, Matteucci stated there is a continued commitment to recruit officers to the understaffed Napa State Hospital Police Department.  She reported a 9% vacancy rate in the rank of  officers, 8% in sergeants and 40% in lieutenants. She stated salary is one of the issues.