"They committed themselves to the challenge, trained for it and in the spirit of healthy competition among law enforcement officers, they performed in outstanding fashion.   We applaud our CSLEA members in State Parks, the Department of Justice, Alcoholic Beverage Control, Department of Motor Vehicles and Department of Insurance who competed  in the Baker to Vegas race." - CSLEA President Alan Barcelona

"We did great!!!" said RPPOA-CSLEA Member John Anderson.  Anderson, a State Parks Peace Officer Lifeguard was a team captain for a State Parks team.  "Seventh overall, right behind CHP, less than 40 seconds behind."

Anderson said his State Parks team took a multi-year hiatus from the event but this year it was important to be a part of it.  "State Parks has participated in 16 of the 30 years this race has been running.  This is California State Parks 150th anniversary.  Our motto is 'fitness through recreation' and our goal is to motivate healthy fitness."

Equally exhilarated by the experience were CSLEA members on the Alcoholic Beverage Control team.  "We ranked 192nd, which was an improvement from last year's overall time," said Ben Delarosa, ABC's  team captain and member of CSLEA and the CSLEA-affiliate California Alcoholic Beverage Control Agents (CABCA).  "We didn't have any issues or receive any penalties, so we're very proud of the team.   The continued support of the CABCA board was once again a contributor to Team ABC's success."

This year’s DMV Investigations Baker to Vegas team completed the 120 mile race in 19 hours, 46 minutes and 29 seconds which was a 36 minute improvement over last year and an hour and 32 minutes faster than their  first year in 2012!   The DMV Investigations team finished 233 out of 261 teams. 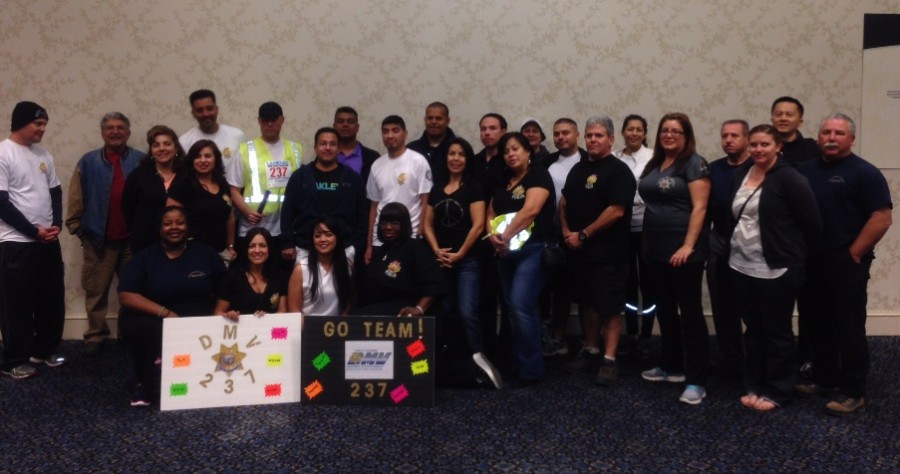 "We beat both of our main rivals'  teams as we were an hour and 19 minutes faster than the Department of Insurance’s sworn team and 40 minutes faster than their invitational non-sworn team," said Luis Hernandez, DMV's team captain and member of CLSEA and the CSLEA-affiliate Association of Motor Vehicle Investigators of California (AMVIC).

"Each and every team member should be congratulated for the countless hours of training they put in and their performance out in the desert," said Hernandez.  "A big thank you also to all our support staff who assisted us in so many countless ways.  From driving the follow vehicles, working the command post, communications, equipment, logistics, fundraising, or whatever else was needed or asked, this race could not have occurred without our support staff. Also a huge thank you to our alternate runners who either got put in the starting line-up, less than 48 hours before the race, who volunteered during the final week, and even becoming an alternate runner the night before the race.  Having you there just in case in the follow vehicle ready to jump out and start running at a moment’s notice is something that we truly do appreciate."

"Baker to Vegas was a great time," said Justin Bolden.  .  Bolden is captain of the Department of Justice team,  a director on the Association of Special Agents-DOJ (ASA-DOJ)  board and a member of CSLEA.  "Our team was able to complete the race without any issues or problems.  We completed the relay in 18 hours and 46 minutes.  A big thank you to our association for  being behind us in this and those who supported our California DOJ sworn team.  We greatly appreciated it."

For those not familiar with the Baker to Vegas challenge, the 120 mile relay race  takes place on highways and roadways from Baker, California to Las Vegas, Nevada.   There are 20 stages in the race, hence 20 team members.  Some team members run four miles, some run 10 miles.  Some run during the day, some run during the night. Some run uphill, some run downhill.  The team captain picks the runner who is right for each leg of the race.  The challenge is about pride, honor and camaraderie.

Getting 20 team members may be the easy part.  Each team is involved in fundraising to pay the $2100 entry fee.  Other costs include rental cars for someone to follow the runners in,  cases of water and other supplies.  There is also a support team and a team command post.  Everything from gas, to reflective vests to hotel rooms costs money, much of it funded by those who participate.

Also participating in the Baker to Vegas Challenge Cup Relay were  CSLEA and California Association of Criminal Investigators (CACI) members on the Department of Insurance team.

From CSLEA to all our members who ran or volunteered, great job!  The date is already set for next year.  The 31st Baker to Vegas Challenge Cup Relay will be March 28-29, 2015.