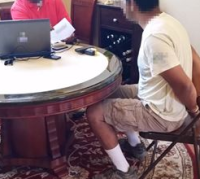 Eleven people suspected of contracting without a license face legal trouble following a sting at a house in  Folsom on June 26, 2014.   Investigators with the Contractors State License Board's (CSLB) Statewide Investigative Fraud Team went undercover, posing as homeowners seeking bids for home improvement projects.  During the sting, the 11 suspects submitted bids of $500 or more (combined labor and material costs) .  Submitting a bid of $500 or more requires that a contractor have a CSLB-issued license.  Those contracting without a license face misdemeanor charges, are cited, and must appear in court.

During the undercover sting,  investigators sought bids on exterior painting, fencing,  landscaping, retaining walls and pool tiling.      The median bid was about $4,000.   Investigators received a high bid of $10,000 for an exterior painting job.  One of the suspects  showed investigators a contractor license number that did not belong to him and was cited on an addition charge as a result.

CSLB licenses and regulates about 300,000 contractors in California, and is regarded as one of the leading consumer protection agencies in the United States. In fiscal year 2012-13, CSLB helped recover nearly $44 million in ordered restitution for consumers.