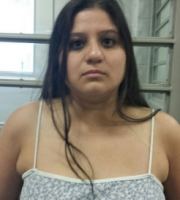 Aurora Barrera, 33, of Downey, on the verge of going to federal prison to serve a nine year sentence, was arrested August 11, 2014 on two counts of insurance fraud.    The charges stem from a workers' compensation claim Barrera filed for treatment of post-traumatic stress disorder after a robbery that she helped to stage at a bank where she worked as an assistant bank manager.

"This is somebody who needs to be removed from society," said California Statewide Law Enforcement Association (CSLEA) President Alan Barcelona.  "Our CSLEA members who investigate insurance fraud have an excellent track record for the arrest and prosecution of people who steal by collecting on fraudulent claims."

Barrera is schedule to begin a nine year federal prison sentence in September for her role in staging a bank heist in East Los Angeles, in which a fake bomb was strapped to her, making it appear as though she were a hostage.  The September 4, 2012 heist resulted in the theft of $565,500 of which $400,000 is still missing.  The bank robbery resulted in a massive response by local, state and federal law enforcement, including the bomb squad which  determined the device strapped to Barrera was fake.

Two days after the robbery,  Barrera submitted a workers' compensation claim for post-traumatic stress disorder. Barrera began receiving medical treatment and collected approximately $2,453 a month in temporary total disability benefits. The amount of benefits paid out to Barrera totaled $35,573. An additional $9,964 was incurred in medical and other insurance expenses.