"This is a chance for our CSLEA affiliate presidents to come together in one room and update us on their affiliate membership issues and present to us feedback that is vital to our organization," said CSLEA President Alan Barcelona.  "In addition, the board voted on which ballot propositions to support or oppose.  We received an update on candidates for state and local offices from our CSLEA Political Consultant Peter Mitchell and an update from CSLEA Legislative Consultant Craig Brown on bills signed or vetoed by the Governor this legislative session. 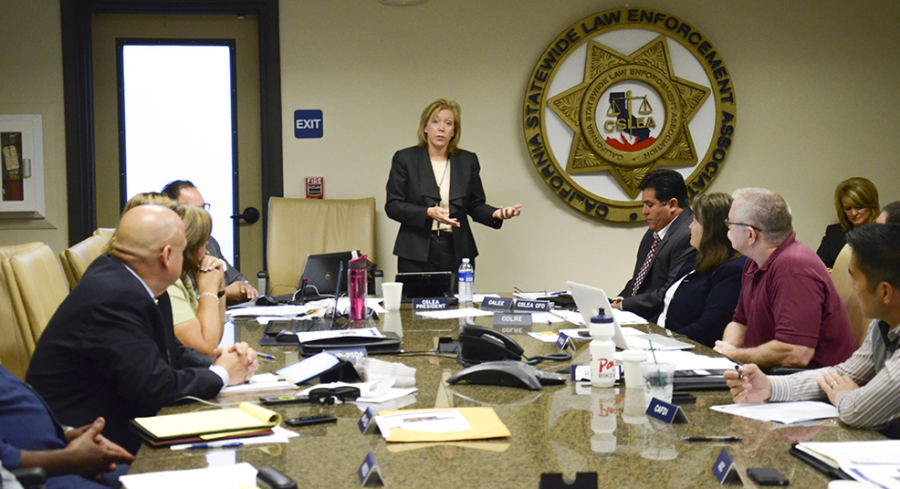 Sacramento District Attorney-Elect Anne Marie Schubert stopped by to introduce herself to those board members whom she has not had the opportunity to meet and to thank the CSLEA Board for supporting her efforts to become the next District Attorney in Sacramento County.  Schubert spoke about her passion for public safety, law enforcement and criminal justice.  She addressed the challenges of prison realignment and talked about Proposition 47 which she has dubbed the "anti-safety initiative."

CSLEA Senior Vice President Tina Brazil updated the board on the success of the September BBQ in Elk Grove and discussed membership event proposals for 2015.

CSLEA Communications Director Teri Cox updated the board on website improvements, emails sent to membership, and CSLEA facebook and twitter accounts.  She reported that the CSLEA Consumer Protection & Public Safety Foundation seminars presented in part by CSLEA leadership and hosted by State Legislators are well received and making the rounds on social media.

The next CSLEA Board of Directors meeting is scheduled for November 12, 2014 at CSLEA Headquarters in Sacramento.