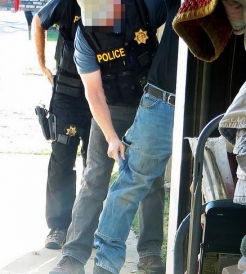 When investigators with the Contractors State License Board (CSLB) go undercover at homes or office buildings  in California, they mean business.

"They set out to snare unlicensed contractors in an effort to protect consumers from harm and to combat the underground economy," said Alan Barcelona, president of the California Statewide Law Enforcement Association (CSLEA) which represents CSLB investigators and nearly 7,000 other law enforcement, public safety and consumer protection professionals who work for the State of California.  "Some of these unlicensed contractors have a criminal history which is why they don't have a CSLB license, others don't have the qualifications to obtain one.  These are not workers you want to hire to come to your home for home improvement projects."

“Several of the suspects we targeted turned out to be repeat offenders and criminals with a history of violent crimes and drug violations,” said CSLB Registrar Steve Sands.  “If you knew their backgrounds, you’d never allow them into your home.”

Among those caught during CSLB’s fall California Blitz were 11 repeat offenders, one sex offender, five suspects with active arrest warrants, two suspects on probation, and three former CSLB licensees. Suspects who turned out to have serious criminal backgrounds were targeted because of ads they posted on Craigslist.

All 112 individuals arrested may face misdemeanor charges for contracting without a license.  The penalty for a conviction is up to six months in jail and/or a fine of up to $5,000.  Eighty-eight suspects also may be charged with illegal advertising.  State law requires contractors to place their license number in all print, broadcast, and online advertisements. Those without a license can advertise to perform jobs valued at less than $500, but the ad must state that they are not a licensed contractor. The penalty is a fine of $700 to $1,000.

Six others may be charged with requesting an excessive down payment. In California, a home improvement project down payment cannot exceed 10 percent of the contract total or $1,000, whichever is less. This misdemeanor charge carries a maximum penalty of six months in jail and/or up to a $5,000 fine.

During the sting, some of the suspects provided contractor license numbers that belonged to legitimate contractors, but not to them.   Consumers should be sure to check a contractor's license number on the CSLB website and ask the person bidding for photo identification.