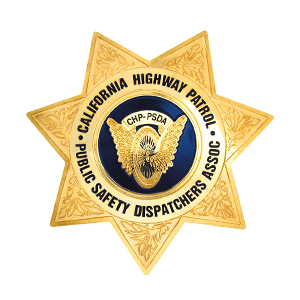 "A CALEA accreditation for our communications operations shines a huge  spotlight on the CHP as one of the most recognized and respected law enforcement agencies and confirms what we have recognized all along, we have some of the best dispatchers in the world who perform their duties with a standard of excellence."  -CSLEA Sr. Vice President, CHP-PSDA President Tina Brazil

On November 25, 2014, The California Highway Patrol (CHP) announced  that its 9-1-1 communications centers, which answer approximately seven million 9-1-1 calls a year, earned prestigious accreditation from the  Commission on Accreditation for Law Enforcement Agencies, Inc. (CALEA), for its communications operations.

"This is beyond prestigious, "  said California Statewide Law Enforcement Association (CSLEA)  Sr. Vice President & CHP-Public Safety Dispatchers Association President Tina Brazil.  "I am proud of Commander DeeDee Teel  and her Communications Center Support Services team.  They have worked very hard to make this happen.  It's a very detailed process and it means  our CHP dispatchers and the policies and procedures by which they perform their life-protecting and life-saving duties  meet  national standards of excellence."

CHP public safety dispatchers are often overlooked as   first responders.  They take on an astronomical number of 9-1-1 calls for service,  including most of the wireless calls in the state.  Their training and professionalism in handling one emergency after another lead to a  Police Officer Standards and Training (POST) accreditation within the last year.

"Congratulations to  our CSLEA members who are CHP public safety dispatchers for their outstanding public safety work ," said CSLEA President Alan Barcelona.  "Our CHP dispatchers are among the most professional in the world.   They work long hours under stressful situations and are always there for the citizens of California and those who visit here."

To meet accreditation standards, the CHP implemented a statewide quality assurance program for its 25 communications center.  Supervisors review audio tapes of 9-1-1 calls and analyze performance according to several performance measurements, including the dispatcher’s speech, prioritizing of information, and accuracy documenting calls. Dispatchers receive constructive feedback and are given an opportunity for self-assessment.