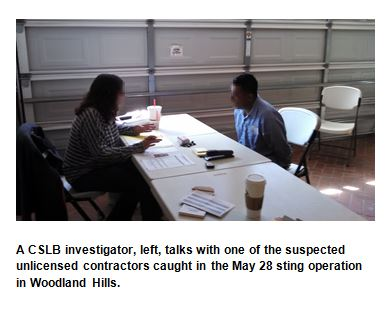 "These investigators work to protect consumers and to protect those contractors who are licensed by the State of California," said California Statewide Law Enforcement Association (CSLEA) President Alan Barcelona.  "The investigators' work exposes the underground economy in which those conducting business are evading taxes and things like workers' comp insurance."

On May 27 -28, investigators posed as homeowners at a house in Bay Point, north of Concord and cited 14 people for illegal contracting.  Three of the 14 had prior citations, including one suspect who was cited in a CSLB sting in Union City in April.

In Central California, CSLB investigators set up shop at a home in northwest Fresno on May 28th.    With the assistance of the California Highway Patrol (CHP) and the Fresno County District Attorney's Office, the investigators sought bids for jobs that included painting, concrete, tile and flooring at a three bedroom house.    In this sting, eight suspects were cited for contracting without a license, two of whom were repeat offenders.

Also on May 28th, CSLB investigators conducted a sting at a house in Woodland Hills.  This undercover operation netted nine people suspected of contracting without a license.

"These are people who advertise online or on flyers or in newspapers," said Barcelona.  "Some of them call themselves handymen, but if they are submitting a bid in excess of $500, materials and labor combined, they must have a license from CSLB.  Consumers should always check the CSLB website for licensed contractors."