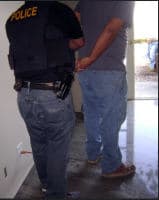 SACRAMENTO – On October 13-15, Contractors State License Board (CSLB) Investigators teamed up with local law enforcement agencies throughout the state to target those contracting without a license.

The undercover stings resulted in 76 people cited, including a suspect who had an arrest warrant and was in the possession of drugs or narcotics.  Twelve of the suspects cited had either been caught in previous stings or have had consumer complaints filed with the CSLB against them.

Suspects were targeted because of tips or previous complaints, advertisements posted in online bulletin boards including Craigslist, Angie’s List, and the Yellow Pages; as well as from ads in local newspapers; community pamphlets that included, Smart Saver; store bulletin boards, business cards, and ads on sides of vehicles. The suspects caught during this operation provided bids totaling more than $360,000.

"CSLB Investigators are working to protect property owners and licensed contractors who follow the letter of the law," said California Statewide Law Enforcement Association (CSLEA) President Alan Barcelona.   "Unlicensed contractors are avoiding background checks and tests that verify they know what they're doing and can be trusted."