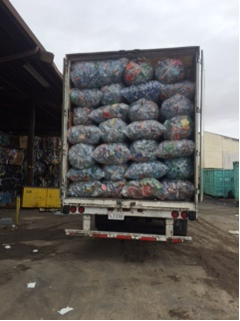 SACRAMENTO- On April 7, 2016, the California Department of Resources Recycling and Recovery (CalRecycle) announced that on February 17, 2016, California Department of Justice (DOJ) special agents arrested a Los Angeles truck driver on charges of attempted grand theft and felony recycling fraud. The arrest marks the second time in three months that a driver operating a New Evolution Trucking vehicle has been caught illegally transporting used beverage containers into California from Nevada in an attempt to defraud the California Redemption Value Fund.

On Feb. 16, special agents with DOJ's Recycling Fraud Team conducted an investigation into a North Las Vegas storage yard with a history of trafficking used beverage containers into California.  At 4:25 p.m., agents witnessed a white semi-truck labeled “New Evolution Trucking” enter the storage yard. The truck and trucking company had been known to illegally transport used beverage containers in the past. Agents followed the truck as it left the yard at 10:42 p.m. and requested assistance from CHP after the driver took a route which would avoid the CDFA border checkpoint in Yermo. 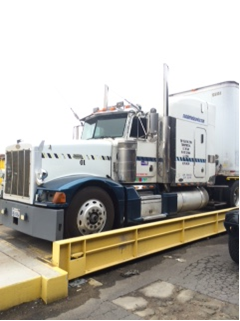 Agents and officers stopped Carlos Flores, 36, of Los Angeles,  off Interstate 15 in Barstow at 2:20 a.m. on Feb. 17. Flores stated he did not have the bill of lading or Imported Material Report required to transport used beverage containers into California. Flores was arrested, and his 53-foot tractor-trailer was impounded. A subsequent check of the materials inside revealed 7,260 pounds of aluminum and 3,360 pounds of plastic used beverage containers with a potential California Redemption Value of $15,464. Flores was released on his own recognizance and is awaiting arraignment at the San Bernardino County Superior Court.

"Recycling fraud is big business and California DOJ special agents on the Recycling Fraud Team investigate these criminal cases on behalf of CalRecycle," said California Statewide Law Enforcement Association (CSLEA) President Alan Barcelona.  "These people involved in this illegal activity are stealing money from the State of California and all of its citizens"