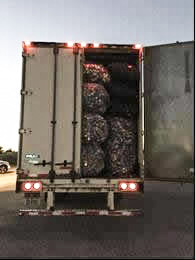 Julio Bolanos, 40, of Los Angeles, is accused of illegally transporting approximately 7,000 pounds of used bottles and cans worth an estimated $11,000 in potential California Redemption Value (CRV) from Arizona to California with the intent to cash them in at a recycling center.

"These suspects bringing recyclable beverage containers into California for cash, when no CRV fee was ever paid at  the time the beverages were purchased, are stealing from the State of California," said California Statewide Law Enforcement Association (CSLEA) President Alan Barcelona.  "DOJ special agents are investigating, making arrests, and seeing these cases through to prosecution and sentencing."

On the day of Bolanos' arrest, DOJ special agents witnessed a tractor-trailer being loaded with used beverage containers in Phoenix, Arizona. Agents later followed the truck into California and observed as the driver took a 70-mile detour to avoid the California Department of Food and Agriculture (CDFA) checkpoint in Blythe, California.

Bolanos, reportedly told the agents that  he was transporting cans from Arizona and did not have a shipment receipt or Imported Material Report, which are legally required to import used beverage containers into California. If Bolanos had gone through the CDFA checkpoint, he would have been required to declare the contents of his load and produce that documentation.

The tractor-trailer was impounded. Bolanos faces six months to three years in prison if convicted.