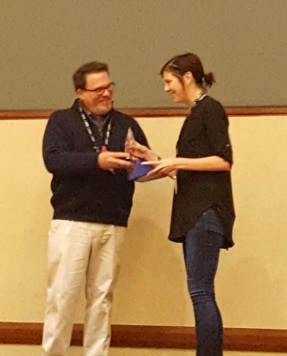 “California DOJ Criminal Intelligence Specialist Headly is deserving of this Analyst of the Year award presented to her by the California Crime and Intelligence Analysts Association for her impeccable work on a San Joaquin County murder case.  She greatly contributed to leading investigators to the suspect and her testimony in court lead to a conviction. Outstanding job! – CSLEA President Alan Barcelona

SACRAMENTO - On September 1, 2016, Criminal Intelligence Specialist (CIS) III Reva Headley was awarded Analyst of the Year by the California Crime and Intelligence Analysts Association (CCIAA).  She received the award based on her work at the California Department of Justice in the Violent Crime Investigative Support Section (VCISS).

Headly, who has been employed with the California Department of Justice as an intelligence analyst for more than 10 years, assists local law enforcement agencies by analyzing communication and cell site activity.

In 2015/2016,  Headly was called upon by the San Joaquin County Sheriff’s Office to help with a first degree murder investigation.  In August of 2015, Detective Karen Sangster  provided Headly with cell tower data dumps and call detail records with cell site information on several phones. Headly  documented her analysis in multiple case reports to the detective. Headly was contacted by a Deputy District Attorney and developed additional analytical products to be utilized in prosecution. In June 2016, Headly was subpoenaed to provide expert testimony at the jury trial on her analysis of the data and products. The defendant was convicted of first degree murder, attempt murder, mayhem, and multiple enhancements (firearm and previous prison related). In July 2016, he was sentenced to 116 years to life in prison.

Detective Sangster credited Headly with providing evidence to rule out a potential suspect and to track the actual suspect.  The detective also credits Headly for her assistance and expert testimony during the trial.  "Without Riva's due diligence in assisting with my investigation, the outcome would not have been possible," wrote Sangster.

CCIAA’s purpose is to promote the exchange of crime and intelligence information and encourage professional development in the analysis field.