SACRAMENTO—  A Stockton man was arrested at his home on September 20, 2016  after a federal grand jury returned a four-count indictment, charging him with unemployment fraud.

"Unemployment fraud is a crime against all of us," said California Statewide Law Enforcement Association (CSLEA) President Alan Barcelona.  "EDD investigators team with local and federal law enforcement officers to uncover those who are ripping off the system.  In this case, a suspect other than Alexander, is accused of collecting more than a half million dollars in fraudulent unemployment insurance benefits. 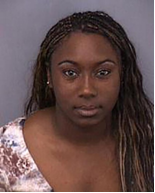 Hollimon is currently a fugitive. Anyone with information on her whereabouts should call (415) 625-2685.  If convicted, Hollimon faces a maximum statutory penalty of 20 years in prison and a $250,000 fine. She also faces a mandatory minimum two years in prison for aggravated identity theft, which would run consecutive to any other sentence imposed.

If convicted, Alexander faces a maximum statutory penalty of 20 years in prison and a $250,000 fine.