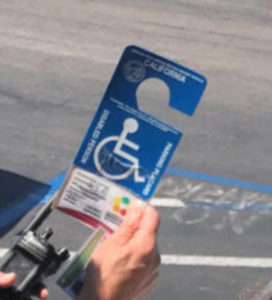 HAWTHORNE– When California Department of Motor Vehicles (DMV) investigators set up a disabled parking enforcement operation at a Target store in Hawthorne on June 10, 2017, they knew they were likely to find people fraudulently using Disabled Person Parking Placards (DPPP) but what may have been surprising were the 20 people they caught parking in a handicapped parking space with absolutely no DPPP whatsoever.

“That’s just a blatant disregard for fellow human beings who experience pain and or difficulties in their mobility,” said Kenny Ehrman, president of the Association of Motor Vehicle Investigators of California (AMVIC).  “DMV investigators conduct these enforcement operations to educate the public about DPPPs, and to cite those who fraudulently use a DPPP,  or in the case of the operation at the Hawthorne Target store, those who park in a handicapped space when they don’t possess a DPPP.”

DMV investigators issued 32 citations that day, 12 offenders were using a DPPP that was not theirs.

This crackdown followed another enforcement effort that took place in Hawthorne on April 18, which resulted in 23 citations and the confiscation of Disabled Person Parking Placards.

Offenders must appear in court to face possible fines that range from $250 to $1,000. While the misdemeanor offense will appear on an offender’s driver record, no points will be assessed because it is not a moving violation.

In April and May, DMV investigators issued 121 citations during focused crackdown operations held throughout the greater Los Angeles area.  During that same period, 552 people received citations throughout the state for misusing Disabled Person Parking Placards.