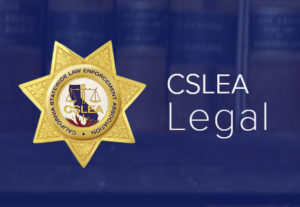 “This fund is so important to CSLEA members who suddenly find themselves in need of legal assistance for criminal or civil matters arising from the course and scope of employment.  We are extremely proud of this growing fund to defend our members as it is an essential part of career insurance.” -Alan Barcelona, CSLEA President

SACRAMENTO – Each year, the California Statewide Law Enforcement Association (CSLEA) advises members of the status of the CSLEA Legal Defense Fund.  Below you will find a link to the Summary Annual Report (SAR) for the year ending December 31, 2016.

For those not familiar, the CSLEA LDF Plan is designed to provide legal assistance to CSLEA members for criminal and civil matters arising out of the course and scope of their employment. Experienced LDF Panel Attorneys from reputable law firms throughout the state provide defense in civil and criminal prosecutions of members. Only those attorneys who have a demonstrated track-record in successfully defending public safety members become part of the CSLEA LDF Panel. These firms have agreed to make their attorneys available to CSLEA members at any time of day or night and are therefore, willing to respond to incidents such as officer-involved shootings which often occur in the middle of the night. The plan also funds affirmative relief and cases of major importance such as POBR violations and pension attacks.

“Legal defense cases can take months, if not years, to resolve,” said CSLEA President Alan Barcelona.  “We continue to build this fund so that our members can have the best legal defense possible for as long as it is needed.  The LDF has been used to defend members in criminal and civil proceedings.  Given the nature of our duties, it’s so very important to have access to this fund.”