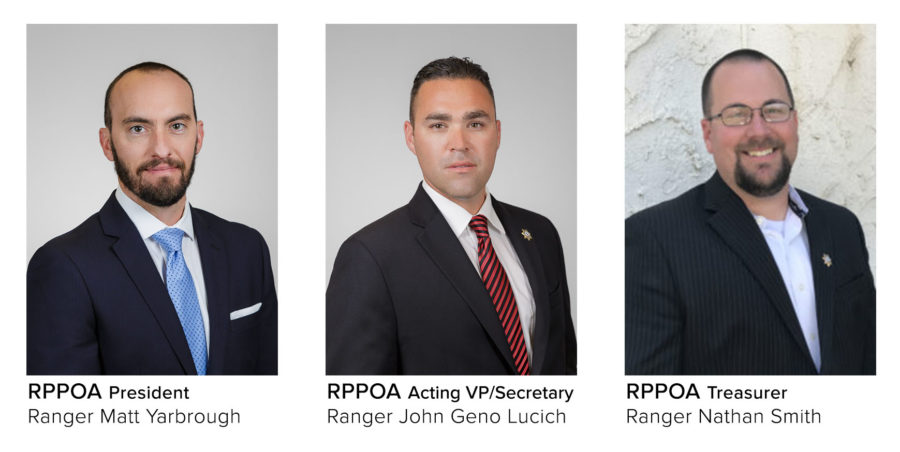 “California is a large, heavily populated state, and if park users had any idea of how few and sparse the park rangers really are, I think they would be extremely concerned for their safety,” said RPPOA President Matt Yarbrough.  “We are down 400 positions, historically.  In addition, there is a shortage in the number of people at State Parks to answer 911 calls. No one wants a 911 call to go unanswered, be delayed in getting answered, or the caller being put on hold.”

In addition to staffing shortages, the RPPOA board discussed the lack of adequate safety equipment supplied to rangers, specifically tasers.  The rangers are issued a baton, pepper spray and a firearm, but State Parks does not equip most rangers with a taser.  There are, however, a few dozen rangers who have tasers because they were part of a pilot study several years ago.  The rest of the department goes without.

The rangers spoke of the disturbances and emergencies they respond to, the pursuits initiated by fleeing suspects, the crowded OHV parks, and medical evacuations.  They discussed the continued reluctance of State Parks management to address these very serious public safety issues and began the discussions of sharing their very real concerns with the public through social and traditional media investigations and reports.

“We’re calling for the equipment and staffing to protect people in California’s State Parks,” said Yarbrough.  “We are out there on our own, covering a vast area where crimes do occur.  We need back-up, we need more rangers who are familiar with the parks’ geographical features, dangers and the locations that typically attract those who commit crimes. Park visitors deserve to be better protected.”

"The resource protection mission of State Park peace officer rangers cannot be understated or our leadership and field support marginalized through inertia. The public expects safety, access, and results,” said RPPOA Secretary John “Geno” Lucich.  “We need to provide that level of service, but we fail the public without the proper staffing levels and mission support. The heritage and benefits of having an effective state park system is at stake, and at a time globally when it's all about resources."

The RPPOA board will convene November 8, 2017 to implement phase one of its strategy to make these safety concerns public.