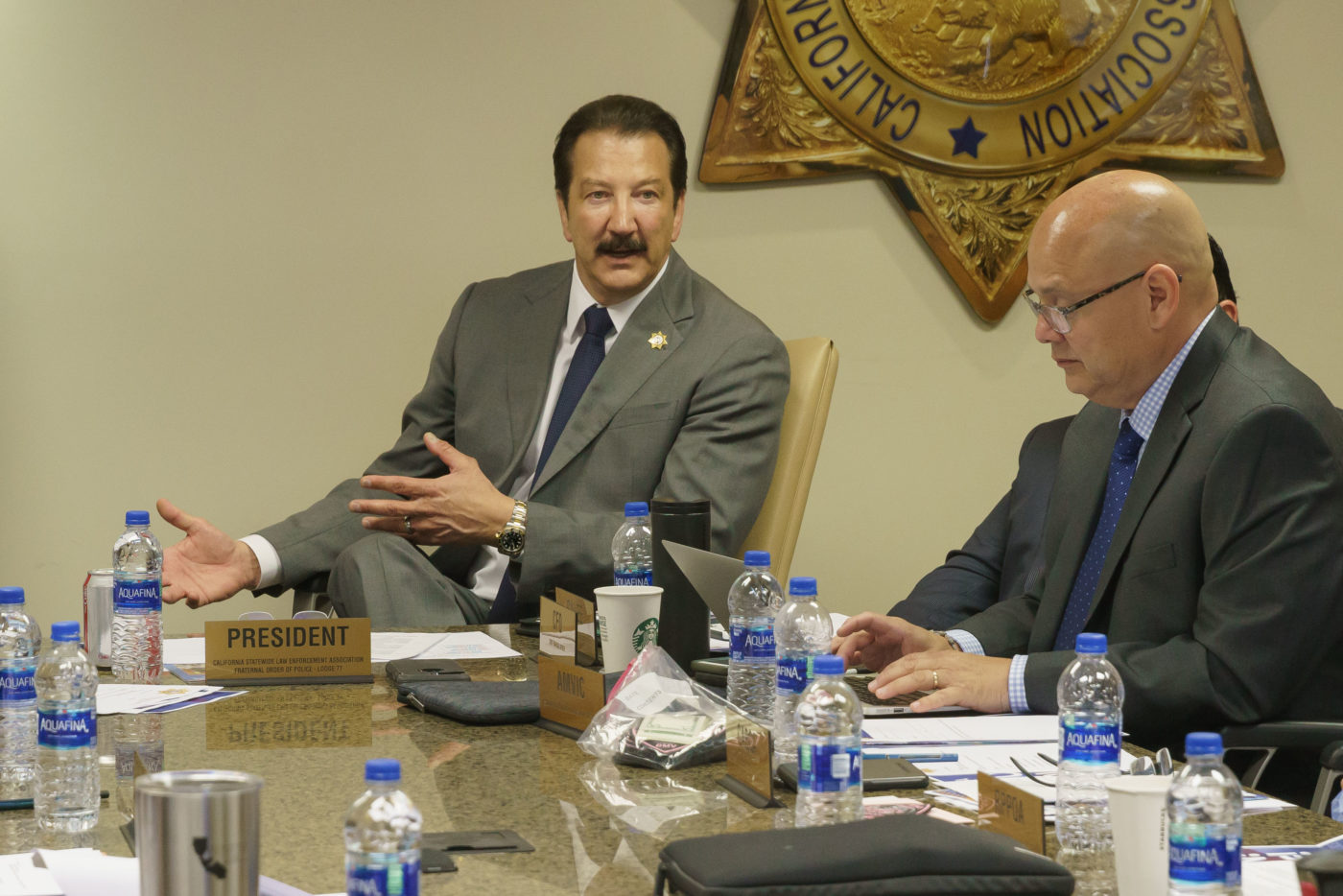 “Every director was present for this very important meeting and all are united in the effort to be union strong,” said CSLEA President Alan Barcelona.  “Our directors, each of them president of a CSLEA affiliate, have witnessed over the years - our support for, and protection of, our members - and our non-stop fight for benefits, job and pension protection, and increased pay.”

The meeting at CSLEA headquarters in Sacramento was held on September 25, 2018 and began with the Pledge of Allegiance and a moment of silence for fallen law enforcement officers, firefighters and military personnel. 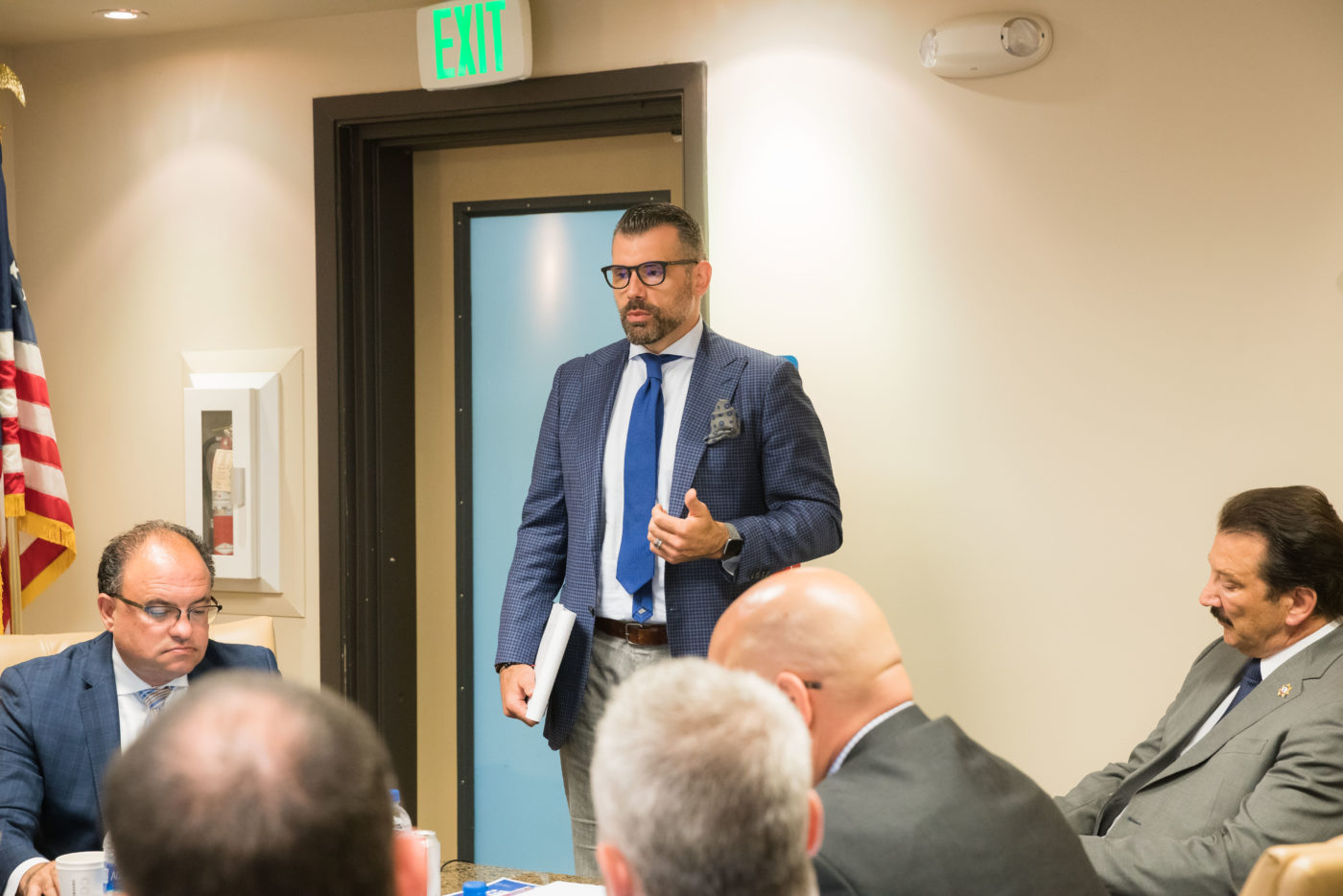 Legislative Advocate Shane LaVigne of Capitol Advocacy briefed the Board on the close of the 2018 legislative session, bills still awaiting the Governor’s signature or veto, and issues that will likely return in 2019.  “Public safety is a huge issue and it plays well in districts, so expect to see more legislation surrounding that,” said LaVigne.  LaVigne reported to the Board that CSLEA has an impressive presence at the Capitol and will continue to press for legislation that makes sense for public safety and work against legislation that doesn’t. 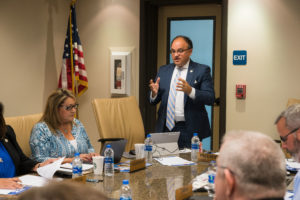 Political Correspondent Peter Mitchell spoke to the board about the upcoming November election, polling, and the current CSLEA endorsements of candidates.  “The endorsement task was daunting,” said Mitchell, recognizing that public safety leaders often struggle between supporting a conservative candidate for law enforcement reasons and a democratic candidate for preservation of benefits and pension protection.  Mitchell also commended directors for their work over the years to reach the level of political strength that CSLEA has achieved. 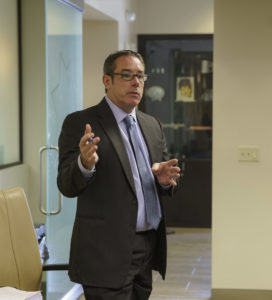 CSLEA Chief Legal Counsel Kasey Clark broke down the Janus V. AFSCME United States Supreme Court decision pointing out that the Court overturned 41 years of precedent.   He addressed the post-Janus environment and steps that are being considered or taken to reach members and non-members, enhance benefits, and pursue possible administration or legislative solutions to the issue of free loaders riding on the backs of members who see the value in collective bargaining and employee protection.

CSLEA Director and Association of Criminalists-Department of Justice (AC-DOJ) President John Miller presented two membership enhancement benefits adopted by the AC-DOJ Board this month, including an AC-DOJ retirement bonus and a “total loss of primary residence” benefit.  “We modeled the ‘total loss of primary residence’ benefit after the Fraternal Order of Police’s.  It’s something that can help with immediate and unexpected expenses after a member has lost his or her home due to a disaster,” said Miller. 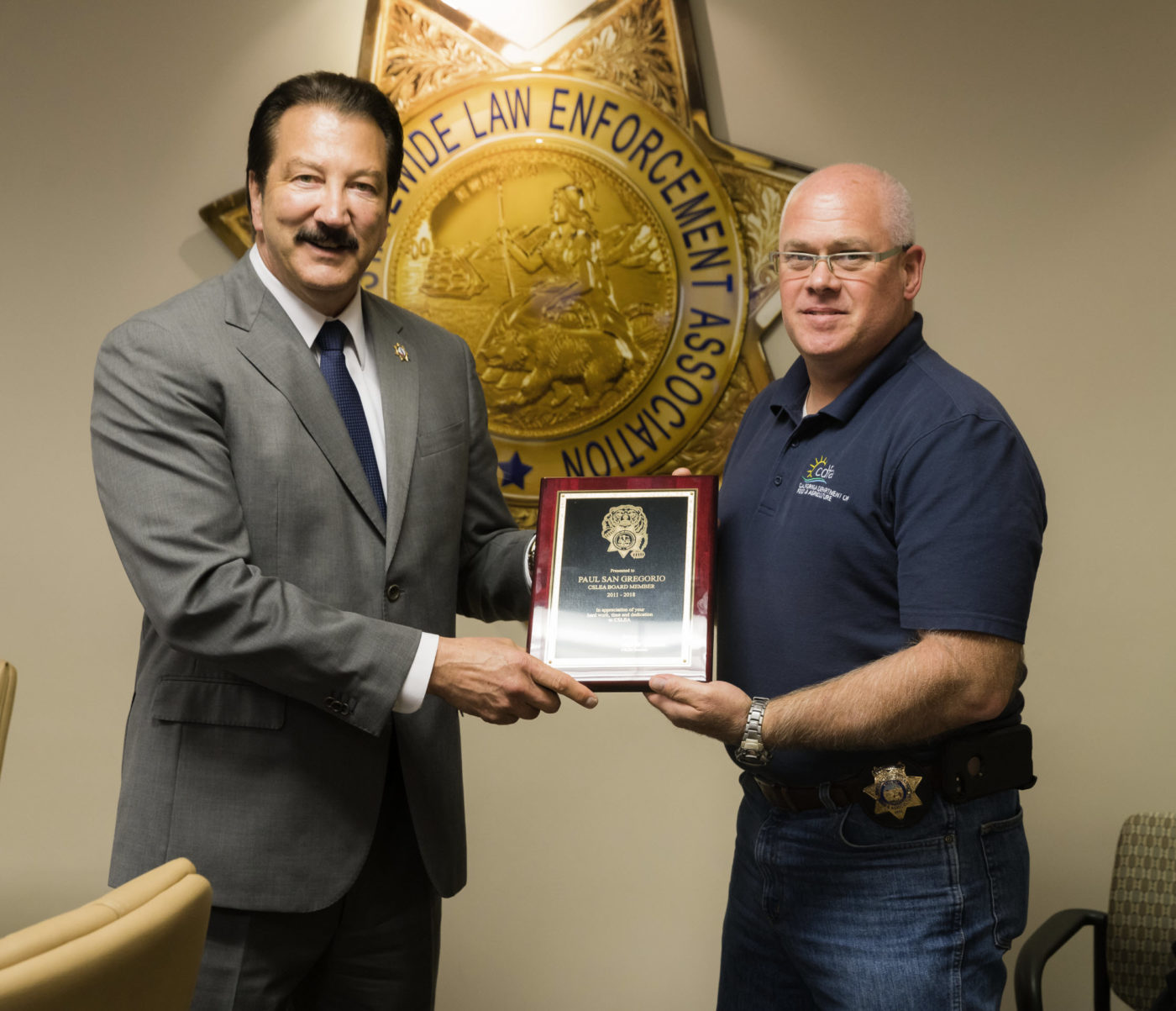 CSLEA President Alan Barcelona presented a plaque to former CSLEA Director and California Association of Fraud Investigators (CAFI) President Paul San Gregorio for his seven years of service on the CSLEA Board.  San Gregorio promoted to supervising investigator for CalCannabis which prevents him from continuing his valued service on the Board.  “You guys are a family,” said San Gregorio.

CSLEA Senior Vice President Tina Brazil reported to the Board that plans for a fall membership conference are on hold as current attention must be focused on post-Janus efforts.

CSLEA Unit A Vice President Kenny Ehrman spoke to the board about the recent CSLEA Scholarship Awards, noting CSLEA awarded eight $1,000 scholarships and members whose children received the awards are extremely grateful.  “When we first started our scholarship program, we had less than 10 applicants,” said Ehrman.  “Routinely we are reviewing close to 50 applications every year.  These children are excelling in their studies and community work and their accomplishments speak well of our members who are raising such outstanding students.  This was one of our toughest years in decision-making.”

The following are statements from CSLEA Directors regarding union membership and the Janus V. AFSCME case: 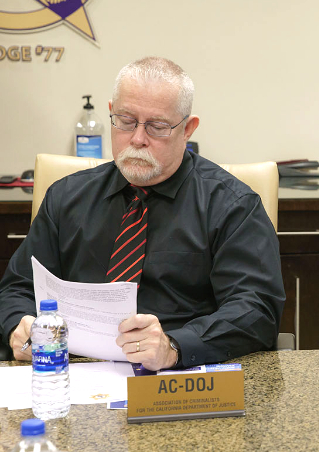 Association of Criminalists-Department of Justice

“This is absolutely the time to be a union member and demonstrate your commitment to strength in numbers.  Unions work full-time at improving your working conditions, salary and benefits all the while protecting your retirement.  Full time!  It’s a full-time job to keep up the fight.  Being a member, makes you a part of that noble effort.”

“It is imperative that we stay together, ACE & CSLEA, through this troubling time following the Janus decision.  We can weather this storm and come out as a stronger union.  I encourage all non-members to become members to take advantage of our benefits and keep our union strong.  CSLEA is always working hard to protect our retirement benefits and to improve benefits in the future.  We are in a very good bargaining position for our next contract, July 2019. Your membership puts us in a stronger position.  My Union!  My Choice!”

“In the face of watershed changes in the executive and judicial offices over the last two years, it has never been more critical to promote fair labor practices through a strong union that works to secure justice for current and future state employees.”

“Union membership provides strength in numbers.  In the state of California, it is more important now than ever to ban together to protect our benefits, retirement and pay.  Your membership equals our strength and protection. The only way to secure your future compensation is to get involved, become a member.  Do it today!” 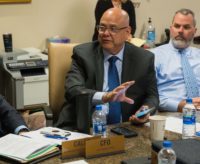 “The Janus V. AFSCME decision strikes at the heart of what has enabled CSLEA to achieve gains in pay and benefits.  We as members must stay strong and be resolute as a united voice.”

“The Janus decision was a definite impact to us at CSLEA, but the resolve CSLEA has demonstrated, while continuing to do the work of fighting for better benefits, salaries, and the defense of all our member rights, is truly impressive.  In a time when law enforcement finds itself under constant scrutiny, agencies are more and more inclined to cave under this pressure, leaving peace officers standing alone to defend themselves.  It is foolish of any peace officer to expose him/herself and their families to this scrutiny and possible damaging effects, due to the lack of representation.” 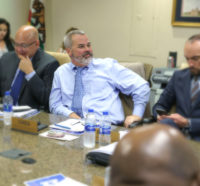 “I’ve witnessed the strength of CSLEA and its unwavering support of CABCA.  Together CSLEA and CABCA have met with legislators and worked with administrators to make positive changes for ABC agents and licensing representatives. Our work is not done and we must stand together to accomplish what is best for us as agents and licensing representatives, for our families, and for our future.” 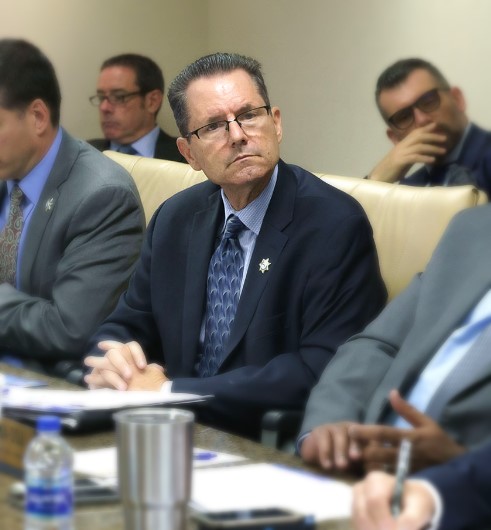 “My Union! My Choice! Never before in history has law enforcement and public employee unions been under such attack.  CSLEA is our union, my union, working hard to protect our members, our rights and benefits.  Don’t be alone, stand united with us.” 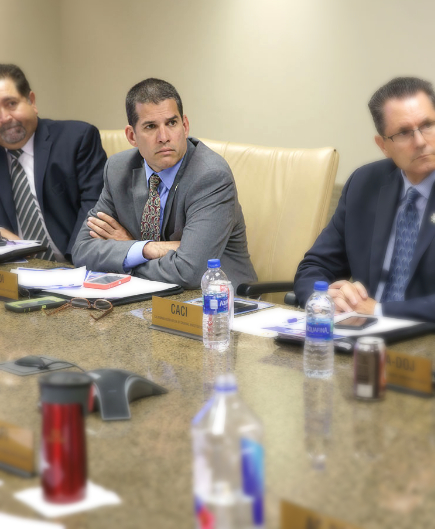 “It is so important to maintain our long-term view of what CAFDI & CSLEA membership offers.  I hope none of us ever needs our Legal Defense Fund, but I sleep better at night knowing my family is protected should something happen during my employment as an FDB investigator.  CSLEA works to protect our pensions so we may enjoy some retirement security following our long careers with the state.  Don’t let union membership decrease as it diminishes the ability to look out for our long-term interests.” 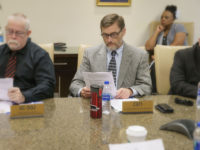 "The Supreme Court’s Janus decision should be a wakeup call to all union members, as well as to their co-workers who have decided they will not join the union.  The current anti-union climate is taking a toll on the many gains that unions have obtained over the past.  Even Forbes recently published an article by Christian Weller who stated 'The loss of union has done real harm to American families’ financial security.  Declining union membership, for one, contributes to massive wealth inequality.'  Now is the time to show California and the country that we are union strong.  We invest in our future by investing in our union.  CSLEA continues to grow in strength and is steadfast in its focus on its members." 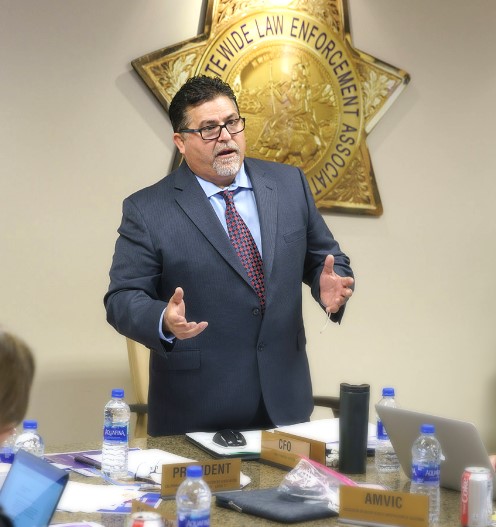 “CSLEA is energetic and the Board of Directors is united and looking forward to contract negotiations.  We invite everyone who is interested in bettering their job classifications to participate in the negotiations process.” 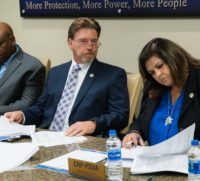 “Before getting involved with my union, I had no idea what the union did or how much they worked and fought for my rights.  Now that I am president of CARII and a vice president of CSLEA, I realize I have a second full-time job.  Now, more than ever, is the time for solidarity and having support as a collective organization rather than trying to improve your salary, benefits and fight for retirement security on your own. Let’s be one strong viable force.” 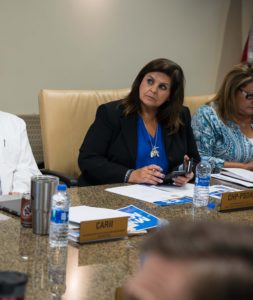 “Coming from the private sector to CHP, you see the importance of the strength and protection of your union.  Union membership is truly your career insurance policy.  CSLEA’ Board of Directors have to make tough choices for their members, these choices are not always popular, but are made for the best interest of our members.  Standing together shows strength and integrity for CHP public safety dispatchers and operators, and for all members.  The Janus decision does not give you a free ride.  It costs all of us in the strength of bargaining and solidarity.”

“Generations have fought and put their lives on the line.  Stay union and keep our way of life!  The Janus decision is an attack on our right to organize.  Don’t be tricked into thinking that by saving a few dollars your life will be better.  We, the examiners at DMV, work less than 16 inches away from perspective applicants.  We need to be protected from all threats, managerial and public.  Together as a unit we stand strong, stronger than before the Janus decision.”

“CSLEA has been a great benefit to FMESA and its members. One classification (Communications Operator) is within 12% of doubling the salary they started at since being moved to CSLEA/FMESA in 2007.  The staff at CSLEA made this possible through their continuous efforts to improve our working conditions.  We (CSLEA/FMESA) still have a lot more work to do for improving our working conditions and I personally would not want to take on that challenge without the support and benefits that CSLEA has been providing to us.” 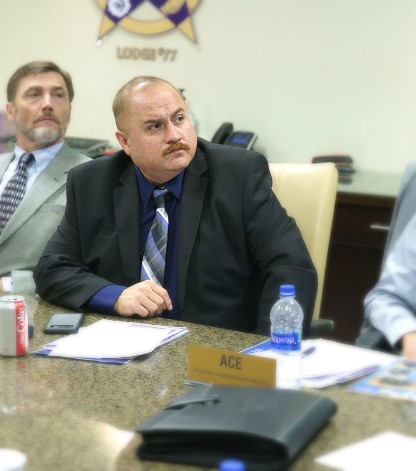 “The strength of CSLEA at the Capitol and its reputation and rapport with those who will likely have a role in our upcoming negotiations process is excellent.  Now is the time to be a part of that strength through union membership as we work to improve salaries, benefits and protect pensions.”

“Rangers, wardens and peace officer-lifeguards should absolutely join forces with CSLEA’s strength and reputation at the Capitol and among administrators.  We are in an excellent positioning for contract negotiations and we must show our strength in numbers.”

The CSLEA directors will meet one more time in 2018, likely in November or December.