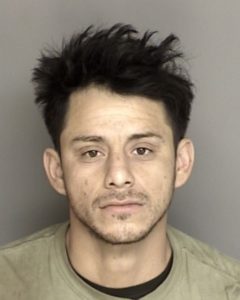 MONTEREY -  On December 18, 2018 the Monterey County Distsrict Attorney announced  that Jose Roberto Meneses, 29, of  Kern County, was sentenced to three years of felony probation, 270 days in county jail, a $5,000 fine, and a $5,000 contribution to the California Department of Fish and Wildlife Preservation Fund for environmental crimes committed at an illegal trespass cannabis grow site.

On July 6, 2018, wardens from the California Department of Fish and Wildlife’s (CDFW) Marijuana Permitting Team, assisted by investigators from the Monterey County District Attorney’s Office Bureau of Investigations, conducted an eradication of an illegal cannabis grow site found on California-American Water Company (Cal-Am) property. Meneses was found on the site tending to the cannabis plants. Initially, upon seeing law enforcement, Meneses attempted to flee. A K-9 unit was deployed and apprehended him.

Cal-Am confirmed that it did not authorize the illegal grow site which was approximately 1.25 acres in size and contained 4,497 cannabis plants at various stages of growth. A makeshift campsite was found near the grow site containing personal items including a sleeping bag, food, and a toothbrush. Dangerous pesticides were also found on site including. a plastic water bottle containing Carbofuran, which is illegal in the U.S. and is highly toxic. Experts believe that just a quarter of a teaspoon can kill a human if ingested. Law enforcement also found an empty container of “Ratone,” an unregistered pesticide containing zinc phosphide, which is poisonous to wildlife. A dead wild rabbit believed to have been killed by a harmful pesticide was found on site.

Meneses watered his cannabis plants using a gravity-fed system of plastic water lines that extended for more than a mile to an active water source. Law enforcement discovered that the water was being diverted from an active tributary to the Carmel River. CDFW estimated that more than  1.6 million gallons of water had been diverted without authorization. After the water lines were collected, a helicopter had to be used to transport the lines for disposal.

On November 6, 2018, Meneses entered no contest pleas to possessing and using a restricted material, depositing a hazardous substance upon the land of another without permission, diverting the natural flow of a stream without a Lake/Streambed Alteration Agreement from the California Department of Fish and Wildlife, and unlawfully killing a wild rabbit.

“CDFW wardens protect California’s natural resources, including fish and wildlife,” said California Statewide Law Enforcement Association (CSLEA) President Alan Barcelona.  “We must not allow the contamination of our soil and water and the use of hazardous chemicals.”