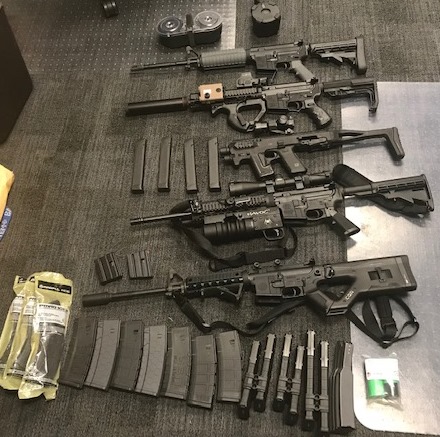 Earlier this year, the CASE Team received a tip and launched an investigation into a person who allegedly obtained Glock conversion switches. When installed, these switches allow the pistol to fire in a fully automatic mode. These switches are considered machine guns, which are illegal.

CASE later obtained a search warrant for the suspect and his residence which was executed at the suspect’s home in Foster City on June 20th.

CASE recovered the following from the residence:

“Thank you to the local, state and federal officers who investigated this case from the first tip that came in, to the arrest of the suspect, and for preparing to see it through to prosecution,” said California Statewide Law Enforcement Association (CSLEA) President Alan Barcelona.  “Nothing positive comes from the possession of illegal weapons.”

The investigation will be forwarded to the Contra Costa D.A.’s Office for prosecution.

CASE  is a joint effort by the Office of the Sheriff, California Department of Justice, California Highway Patrol, Bureau of Alcohol, Tobacco, Firearms and Explosives, Pittsburg Police Department, and Probation Officers from the Contra Costa County Probation Department. CASE was created in November 2011 as a collaborative effort to reduce violent crimes in Contra Costa, especially those related to illegal firearms.