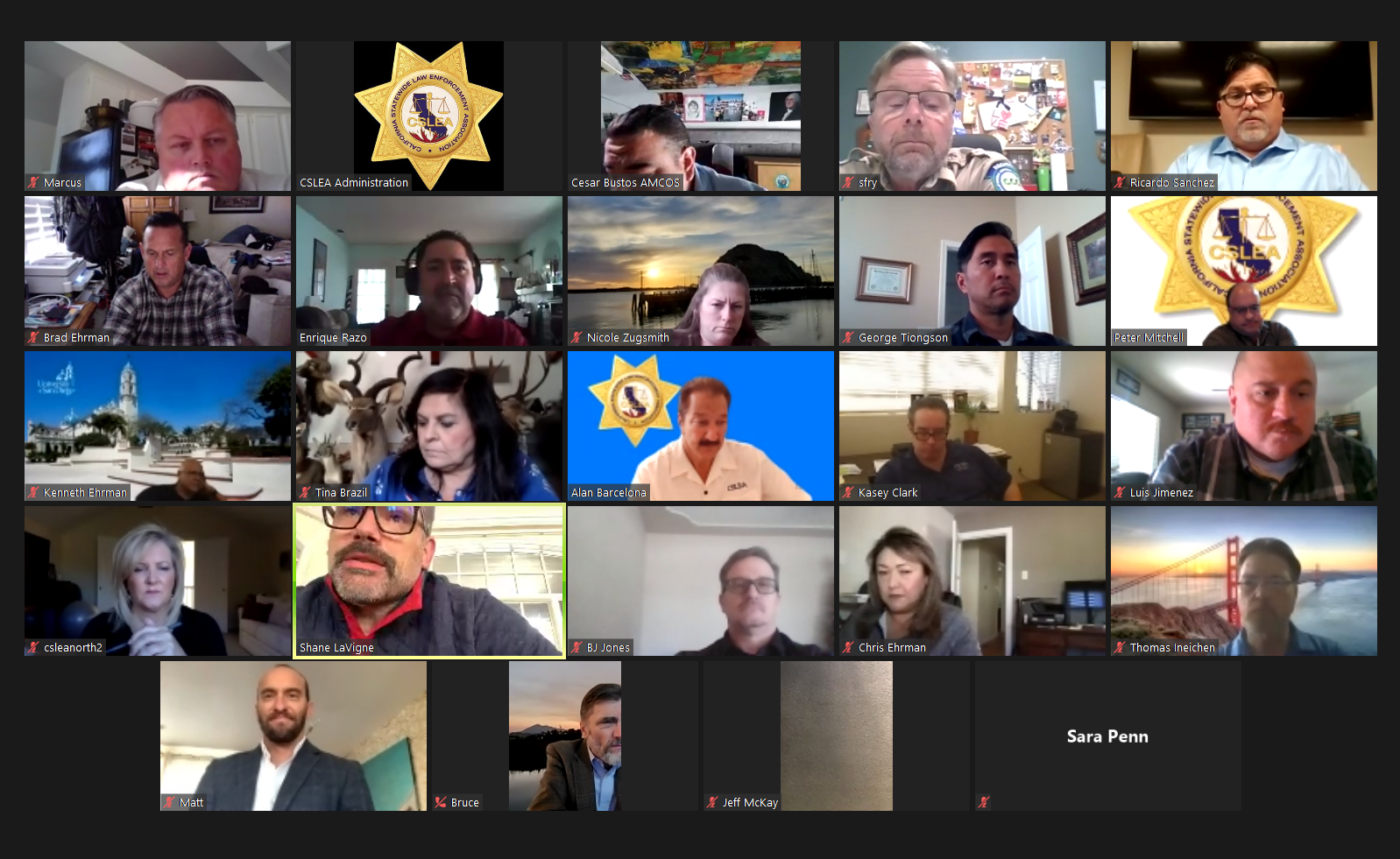 SACRAMENTO - On December 10, 2020, the California Statewide Law Enforcement Association (CSLEA) Board of Directors conducted its last board meeting of the year.   The meeting was conducted via teleconference.

“This was just the second time in the history of our union that we have conducted a board meeting via teleconference,” said CSLEA President Alan Barcelona.  “Directors and representatives from all of our affiliates were present and we were able to cover a lot of ground a disseminate a lot of important information.”

"Whether in person or remotely, we have an obligation to ensure our members’ rights are being advocated for," said Unit A Vice President Ehrman.   "I’m proud to be a part of this board of directors which continues to honor this responsibility."

COMMUNICATIONS REPORT: CSLEA Communications Director Teri Cox reported to the board on CSLEA’s communications effort via emails, website articles, and social media.  Directors learned the ways in which members are reaching out to the union including the “contact us” link at CSLEA.com.  They also received information regarding the types of questions members have been seeking answers to, and the many new Bargaining Unit 7 employees who have used the convenient online application to become CSLEA members.   “It’s important for our directors and members to know we are fully functional despite not being physically in our offices at CSLEA headquarters,“ said Cox.

CFO and MEMBERSHIP REPORT:  CSLEA Chief Financial Officer Ricardo Sanchez presented to the board an update on CSLEA finances and CSLEA membership numbers.  He also informed the board of a new updated, secure membership database to assist with day to day operations.  CSLEA Membership Coordinator Kara Gapske contributed to the report by explaining to directors the new database and the process involved in keeping it up to date and accurate.

"It was encouraging to hear that membership is up and hopefully our fraternal numbers and strength of solidarity will continue to grow, as it is very important now more than ever that we stand as one to protect our rights, benefits, and working conditions in these most uncertain and difficult times," said CSLEA Unit B Vice President Tom Ineichen.

CONFERENCE COMMITTEE REPORT: Due to the pandemic and physical distancing, there are no CSLEA conference or large meetings currently planned for 2021.

LEGAL DEFENSE FUND (LDF) and LEGAL REPRESENTATION COMMITTEE (LRC) REPORT:  CSLEA Chief Counsel Kasey Clark updated directors on legal cases currently be conducted on members’ behalf and advised directors that the CSLEA Legal Defense Fund has recently surpassed the $2 million mark, something CSLEA, its directors and members should be proud of.  Due to confidentiality requirements, details of pending legal cases on behalf of members are not made public.

CSLEA FOUNDATION SCHOLARSHIP COMMITTEE REPORT:  CSLEA President Alan Barcelona informed the board that the CSLEA scholarship program, which was not offered this year, will likely resume next year.  “It’s unfortunate that this year we were not able to offer the eight $1,000 scholarships that we typically do, but it looks as though we will be able to resume the program next spring.  We know how much our members value the scholarship program, but we rely on donations to our non-profit foundation and those came in very late this year.”

LEGISLATIVE REPORT:  CSLEA Legislative Advocate Shane LaVigne spoke of the new legislative session which will face challenges of its own due to the pandemic.  “In person sessions and office meetings are not happening, expect remote lobbying, testifying and meetings,” said LaVigne.  He discussed with CSLEA directors the topics of bills likely to be introduced including those that will impact California peace officers.  He remarked on the strong, working relationship that CSLEA has with many legislators which will keep the lines of communication open so the interests of CSLEA membership can be heard.

POLITICAL REPORT:  CSLEA Political Consultant Peter Mitchell recapped the federal, state and local elections and where the work will continue with elected leaders.  California will see some changes as the Governor has many appointments to make.  Depending on the appointments which could create a “domino effect,” Governor Newsom may be making more appointments to constitutional positions than any Governor has in many, many decades.

"Our political and legislative update was very informative regarding the elections and our newly elected officials including Los Angeles County D.A, George Gascon, and what law enforcement can expect with these new administrations and lawmakers lowering the bar on criminal offenses and what crimes can be charged or how law enforcement should respond,"n said CSLEA Unit B Vice President and California Association of Regulatory Investigators and Inspectors (CARII) President Tom Ineichen.  "I feel it will be a much harder battle and dangerous duty for our front line first responders to do the job of public safety and make it home safe themselves. I thank them for putting their lives on the line and pray for their safety and our State.

COVID-19:  CSLEA Chief Counsel Kasey Clark conducted an update and a conversation among directors regarding the current surge in COVID-19 cases and how it is impacting members.   CSLEA attorneys have been in contact with departments regarding notification and protection policies for Bargaining Unit 7 employees.

“Our members are on the front lines and many are required to work in the field due to the nature of their law enforcement, public safety and consumer protection duties,” said President Barcelona.  “Our job is to be sure they are properly notified of COVID-19 cases they may have come in contact with and that protections are in place.”

CSLEA Director and California Organization of Licensing Registration Examiners (COLRE) President Enrique Razo expressed concern with the growing number of cases within DMV field offices and the concern for his members who conduct 22 drive tests a day with no 6-foot physical distance between drivers and examiners.  He acknowledged that CSLEA senior attorneys Ryan Navarre and Jim Vitko were working diligently with the department to temporarily stop DMV drive tests, just as they found it necessary to do in March as the initial COVID shutdown measures were put into place.   During the course of the board meeting, DMV notified CSLEA that in fact, drive tests would be suspended beginning December 14 through at least December 28, 2020.

CSLEA Director and Association of Deputy Commissioners (ADC) President Marcus Nenn also gave kudos to Attorneys Navarre and Vitko as he has been relying heavily on them to protect ADC members during the pandemic.

Part of the COVID-19 discussion included COVID-19 vaccination procedures, when and which state employees might be vaccinated first, possible consequences as they pertain to a right to refuse, and the future possibility of mandatory  proof of vaccination necessary for public transit travel and admittance to large gatherings such as sporting events, concerts and amusement parks.

CSLEA directors were advised to conduct their affiliate board meetings via teleconference for the time being, if not, a waiver signed by attendees should be considered.

Chief Counsel Clark stated that CSLEA will stay in touch with CalHR as a vaccine program is rolled out.

RPPOA: The CSLEA Board voted unanimously to officially retire the the Resource Protection Peace Officers Association (RPPOA) as an affiliate of CSLEA effective January 1, 2021.  RPPOA which consists of State Parks rangers and peace officer-lifeguards, as well as California Department of Fish and Wildlife wardens will be split into two associations –

“Splitting rangers and wildlife officers into their own affiliates is good for both groups and will provide the best representation for our officers,” said RPPOA Director Matt Yarbrough.  “Things are going well and moving forward.”

CSLEA STAFF:  CSLEA attorneys and staff members joined the teleconference toward the end of the meeting to say hello to directors and update them on their CSLEA projects.   It some instances, it was the first chance for staff members and directors to “see” each other since before the March COVID-19 stay at home order.  Staff members commented on the efficiency of working from home and teleconferences versus travel time to meetings, some of which can be hundreds of miles away.  CSLEA President Barcelona expressed his gratitude for having a staff that stepped up during this unprecedented event and year.

"I  want to give a big thank you to the CSLEA legal team and staff for all they do and have accomplished and wish them a very Merry Christmas and Happy New Year (and a much better year at that). Their updates and hearing of the continued and ongoing work and accomplishments for all our members, including advancements for CARII (reclass for CSLB Reps and possible classification changes for BAR Reps) members, was awesome. Great work and I wish you all the best and happy holidays," said CSLEA Director Ineichen.

NEW CSLEA DIRECTOR:  President Barcelona welcomed new CSLEA director Sara Penn to the board.  Sara Penn becomes president of the Association of Criminalists- Department of Justice (AC-DOJ) following former president John Miller’s promotion to supervisor at DOJ.  Supervisors may remain members of CSLEA but cannot serve on affiliate boards or the CSLEA board.   Penn has been present at CSLEA board meetings for many years so will be able to “hit the ground running.”

“It’s an honor and a privilege to be sitting at the CSLEA board meeting representing the members of AC-DOJ. Thank you to the AC-DOJ members and the CSLEA board for granting me this opportunity,” said Penn.

IN CLOSING:  CSLEA President Barcelona reflected on military personnel and law enforcement officers who have served their country and their communities and died in the line of duty, this year and over the years and asked for a moment of silence to remember their sacrifices.   “Please keep the families of these heroes in your thoughts and prayers as they have made many sacrifices as well and continue the difficult journey without their spouse, child, or parent.”

CSLEA Director and CACI President George Tiongson - “Your board continues to work on your behalf through these difficult COVID times, including defending against attacks on our profession. Please refer to CSLEA.com for the latest news on COVID vaccine disbursement, clarifications on PLP use, and other member affiliate news."

CSLEA Director and FMESA President BJ Jones - "Our members are on the front lines as we deal with this pandemic and CSLEA is a shield to help protect them.  It was eye-opening to see our chief counsel receive information about the cancellation of DMV drive tests in the middle of our board meeting.  Our union leaders and staff are extremely dedicated."