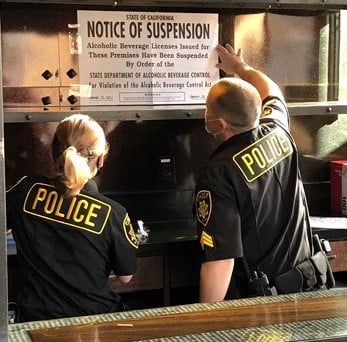 FOLSOM– On January 15, 2021, California Department of Alcoholic Beverage Control (ABC) agents posted a 45-day Notice of Suspension at Catch a Wave by Blue Nami restaurant in Folsom. The suspension means alcohol sales at the location are prohibited immediately. The suspension remains in effect until February 28, 2021.

In February 2020, ABC agents arrested two Catch a Wave by Blue Nami employees for allegedly furnishing alcohol to an employee who was under 21 years of age and who later died. Shortly after the employee was illegally furnished alcohol at the restaurant, she was involved in a fatal single-car crash on East Bidwell Street and Oak Avenue Parkway in Folsom during the early morning hours of September 20, 2019.

ABC opened a Target Responsibility for Alcohol Connected Emergencies (TRACE) investigation immediately after the crash to find the source of the alcohol consumed by the under-21-year-old -driver. The Folsom Police Department investigated the cause of the vehicle crash.

ABC agents who conducted the TRACE investigation interviewed witnesses, examined evidence, and determined that on the evening of September 19, 2019, Catch a Wave by Blue Nami employees furnished alcohol to the minor employee at the Folsom Restaurant.

On that same evening, a 21-year-old patron left the restaurant and was later arrested by the California Highway Patrol for driving under the influence. After further investigation, ABC agents charged one of the two employees with furnishing alcohol to an obviously intoxicated person.

“It is important that servers follow ABC rules and regulations for the safety of all of us,” said California Statewide Law Enforcement Association (CSLEA) President Alan Barcelona.  “So many lives can be negatively impacted, or even lost, when someone overconsumes alcohol.  In this case people were arrested and one died.  Thankfully ABC agents routinely check on ABC licensees and investigate violations.”