CSLEA Directors Meet for First Board Meeting of 2021 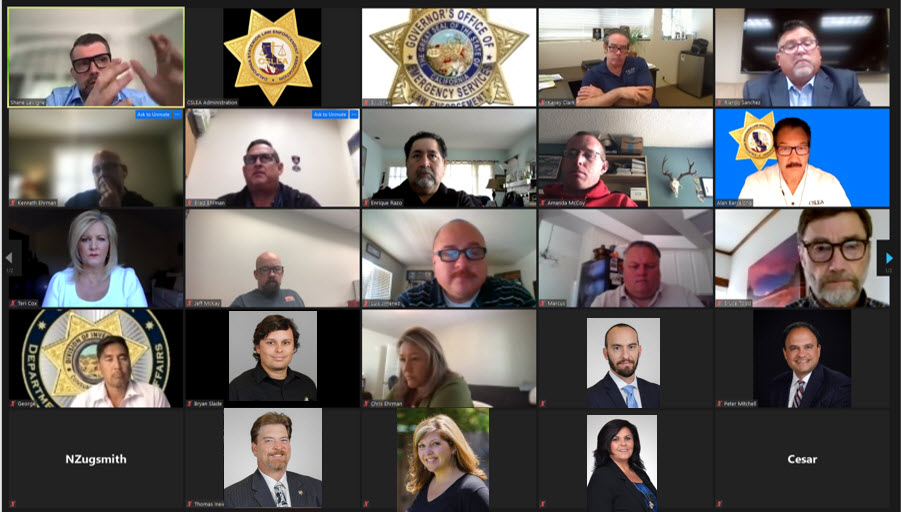 “This was a productive video conference meeting in which all 18 affiliates were represented.  It was an opportunity to go into executive session and bring our affiliate presidents up to speed on preparations involving upcoming negotiations with the state, among other CSLEA business.” – CSLEA President Alan Barcelona

SACRAMENTO – On April 20, 2021, the California Statewide Law Enforcement Association (CSLEA) officers and directors met for their first Board of Directors meeting in 2021.  The meeting was conducted via video conference in which 17 affiliate presidents and one affiliate vice president were present to discuss CSLEA business.

After a moment of silence for fallen public safety and military personnel, the agenda included reports from CSLEA’s communication director, political and legislative consultants, chief counsel and general manager, as well as CSLEA committee chairs.

Following those reports, the CSLEA directors conducted an executive session in which members of the CSLEA negotiations team discussed in depth the preparations being made prior to bargaining with the state and following the state’s May budget revision.

“This is a trying and yet, hopeful time for our members,” said CSLEA President Alan Barcelona.  “We are striving for the best possible outcome following such an unprecedented and unpredictable set of circumstances.  I would suggest to our members to remain hopeful but pause, to remind all, on a personal or family level, it’s never a good idea to forge ahead with spending based on what you hope for.  We are a strong union with a strong voice and a strong bargaining team.  We are very much prepared to represent our all our members in their respective job classifications.”

While discussions held during the Board’s executive session  cannot be made public, following the meeting,  CSLEA Director and President of the Association of Deputy Commissioners (ADC) Marcus Nenn said, “Members should be heartened to learn that despite the obstacles presented by the pandemic, CSLEA has worked throughout to promote a return to normal working conditions and compensation for sacrifices made to stabilize California during this emergency."

"I am very excited to hear that CSLEA will be going into negotiations after the Governor's May revise and hope for a very positive outcome," said CSLEA Unit B Vice President and President of the California Association of Regulatory Investigators and Inspectors (CARII) Tom Ineichen. "It was also nice to hear we are moving in the right direction coming out of this pandemic."

Legislative Report:  CSLEA Legislative Advocate Shane LaVigne updated the CSLEA Board on legislation being considered at the Capitol and the climate surrounding bills involving public safety and law enforcement.

“With all of the anti-law enforcement bills coming through the Assembly and Senate, it is more important than ever to have folks like those at Capitol Advocacy watching our backs and advocating for law enforcement,” said CSLEA Director and President of the Association of California Wildlife Officers (ACWO) Ryan McCoy.

LaVigne also updated the Board on CSLEA-sponsored Senate Bill 284 which involves workers’ compensation as it pertains to PTSD for first responders in Bargaining Unit 7.

“Showcasing the effects of CSLEA sponsorship, such as support of SB284 is a great way to show how we can make a positive change for our members,” said CSLEA Director and President of the California Association of Criminal Investigators (CACI) George Tiongson.  “In order to accomplish things like that, there’s a lot of behind-the-scenes activity by our board in order to preserve and promote our member benefits.”

Political Report:  CSLEA Political Consultant Peter Mitchell provided updates on special elections, the recall attempt involving the Governor, and the recent appointments to state constitutional offices.  He pointed out to directors CSLEA’s strong voice and ability to have productive dialog with those in office.  “You are the flagship group in public safety,” he said.

Legal Defense Fund (LDF) and Legal Representation Committee (LRC) Report:  CSLEA Chief Counsel Kasey Clark updated directors on pending cases and litigation. He reported to the Board, the LDF currently has more than $2.2 million in assets which reflects the fund is doing well.

Clark also updated the board on follow-up work by CSLEA attorneys to an out of class settlement involving the Department of State Hospitals.  As a result, impacted state employees will receive money that could reach into the thousands of dollars for some.

"After a bit of a delay, we have begun to see the beginning of checks being issued to 40 well deserving hospital police officers who have been performing out of class over the last 5 years," said CSLEA Senior Counsel Ryan Navarre.   "In total, the checks amount to a combined total of over $200,000."

CSLEA Membership:  Chief Financial Officer and Membership Committee Chair Ricardo Sanchez updated CSLEA directors on financial and membership numbers.  Sanchez reported that state employees in Bargaining Unit 7 continue to sign up for membership either online, at new employee orientations or through CSLEA’s sponsorship program.  CSLEA President Barcelona expressed that there are still approximately 2,500 state workers in Bargaining Unit 7 who “are riding on the backs of dues paying members, benefiting from the union’s work.”  Barcelona expressed interest in future membership conferences as a way for CSLEA directors, site representatives and members to unite.

CSLEA directors will schedule their next meeting following any tentative agreements to MOU side letters between the state and CSLEA.

“It was great to see all of our affiliate and CSLEA leaders.  We all work very hard for our members and it is great to see what our union leaders, employees and representatives are doing and accomplishing for our members,” said CSLEA Senior Vice President and CHP-Public Safety Dispatchers Association (CHP-PSDA) President Tina Brazil.  “We are in a time in which all law enforcement and public safety is being scrutinized at every level.  We are working to stay on top of these issues and how they affect us.  We also look forward to meeting again soon with CALHR regarding our contract and getting back on track.”

In addition, CSLEA Director and President of the California Organization of Licensing Registration Examiners (COLRE) said, “I want to thank our legal team for going above and beyond for our examiners.  Kasey, Ryan, and Jim, you are there for us 24-7.  Examiners encounter difficult situations daily. It's good to know that you are just a phone call away.”

“I am so proud to serve on the CSLEA Board of Directors," said CSLEA Director and President of the California Association of Food and Drug Investigators (CAFDI) President Nicole Zugsmith. "The level of dedication and commitment CSLEA demonstrates in working with the State and affiliates to support its members is beyond measurable.”