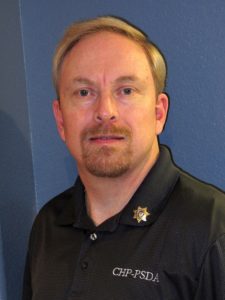 I took a call from a male who was off-road, had been bitten by a snake, fell down a hill, and couldn't get back up to his truck.  He was convinced he was going to die and asked me to pray with him.  Instead of taking the time to do that, I separated myself from the situation and went to work on finding him.  Triangulation was not working since he was in the mountains.  I had him describe to me the trail he took to get where he was at.  Ended up I had been on that trail before as a firefighter for the US Forest Service and was familiar with it.  I was able to direct two helicopters to the area and get them close enough that they found him and directed ground units in.  He survived.

What is one of your most memorable calls on the radio?

The time one of my airplanes told me to tell the fire department that he would be landing the airplane on the freeway and would transport the injured child to the hospital.  The incident was out in the middle of the desert and an ambulance hadn't arrived yet.  Time was of the essence so he landed, scooped up the child, flew to Palm Springs airport where we coordinated an ambulance meeting him just off the runway, and they got the child to the hospital (which was just down the street from the airport) in time.

If there is a second career in your future what will it be?

All of us have that quirky sense of humor.  It helps us to relieve stress and not internalize everything.  Mine started when I was a firefighter for seven years.

Yes, a few times.  Once this lady was stuck off-road, on a road she wasn't familiar with, in 120 degree heat, and had no water.  She was convinced she was going to die but I was able to get enough information from her that the airplane that I sent located her, and I called the off-road tow truck and directed them in to the scene.  Again, I had been through that area while driving off-road and used that knowledge to assist in the call.  She showed up to our center the next Thanksgiving with tons of platters- chicken, meats, sandwiches, the works---from the local Costco!!

People checking their cell phone to see if it works/has service/checking the time/etc.  Happens every day.

Being a union representative and a trainer for 15+ years.  I feel that is the most important, to give back to your profession and ensure your knowledge is passed down to the next generation.

How do you relieve the stress?

I like to take my trucks off-road and go exploring.

Best advice you have received from a fellow dispatcher?

You don't have to remember everything in this job, you just have to know where to look it up and find it. -Marty Castleberry

It’s long overdue and we owe a big debt of gratitude to everyone who fought to have us recognized including CHP-PSDA President Tina Brazil and CSLEA.

My desk always has a non-spill (per policy) coffee cup on it to start the day.

I had always been interested in dispatch while I was a firefighter.  After I hurt my shoulder in the CHP academy, I became a dispatcher.