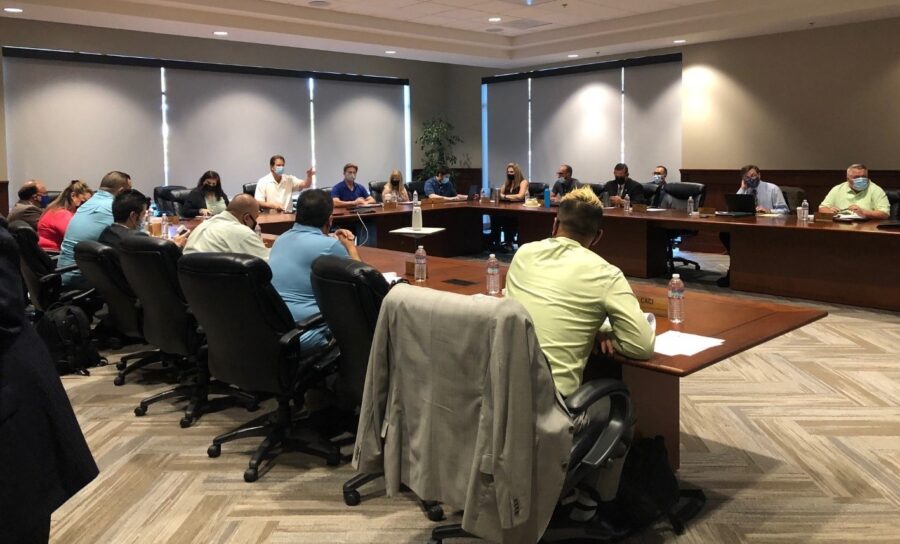 SACRAMENTO - On August 3, 2021, the California Statewide Law Enforcement Association (CSLEA) Board of Directors met to discuss union business at 2600 River Plaza Drive in Sacramento, the future home of CSLEA headquarters.

“After much consideration, it’s expected that CSLEA headquarters will be moving during the last quarter of 2021 to a new location that better serves our Board, our staff, and the safety of our employees,” said CSLEA President Alan Barcelona. “Our August 3rd meeting gave directors the opportunity to see the suite of offices we will be in and allowed us to hold a directors’ meeting in a board room that has more spacing between individuals as we conducted business during an uptick in the number of COVID cases.  This was our first face to face meeting in many, many months and it was wonderful to see everyone, despite the uncomfortableness of wearing masks indoors for the entire day.”

“It was great to be able to be back at the board table with everyone and catch up with what is happening across CSLEA,” said CSLEA Senior Vice President Tina Brazil.  “We all continue to work hard for our members and will always be there for them.  We continue to fight for their benefits. Remember, membership matters!”

CFO Financial Report:  CSLEA CFO Ricardo Sanchez presented his financial report to the board which reflected CSLEA operating within its means and a reduction in travel expenses due to the pandemic and the use of video conferencing for representation meetings, IA’s, settlement conferences and other CSLEA business.

“It is great that this program in which we are able to award eight $1,000 scholarships is back,” said Ehrman.  “Our parents appreciate it.  It was greatly missed last year. Our members have some very impressive and smart children applying for this award.

Membership Report: CSLEA Membership Committee Chairman Ricardo Sanchez reported an increase in CSLEA membership numbers and requested directors to reach out to non-members, some of whom aren’t aware they are not automatically CSLEA members and must sign up to receive all the benefits and services that CSLEA offers.

“Obtaining and retaining retirement, salaries, and other benefits for state employees whom we represent is a constant battle and takes a lot of work by our attorneys, directors, and staff,” said CSLEA President Alan Barcelona.  “Everyone should share in financially supporting their union and the work it does to protect and elevate.” 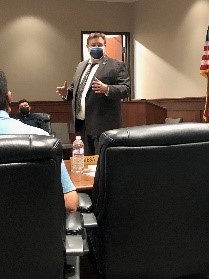 PORAC President Brian Marvel Visit: PORAC President Brian Marvel addressed CSLEA directors expressing PORAC’s goals to expand its footprint in Washington D.C. “because decisions made on the federal level impact all of law enforcement and public safety.”  Marvel expressed that CSLEA and PORAC work well together and looks forward to the combined strength at the State Capitol.  Marvel addressed the likelihood of a state licensing program for California law enforcement officers and other public safety legislation.  He reported that with the uptick in crime in California and the country, support of law enforcement work and legislation will return. 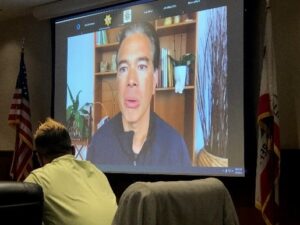 Attorney General Rob Bonta Visit: California Attorney General Rob Bonta addressed the CSLEA Board via video conference call.  AG Bonta thanked the Board for its support and noted the he recently wrapped up his first 100 days in office.  “I’m thrilled and honored to be in this role,” said Bonta. The AG spoke of his support for DOJ employees and the work they perform, officer involved shooting investigations that his office will handle and the APPS program

Legislative & Political Reports: CSLEA Legislative Consultant Shane LaVigne updated the Board on CSLEA-sponsored legislation as well as other items being considered at the State Capitol that might impact public safety and public employees.  LaVigne also commented on the escalating crime rate and how that might affect criminal justice reform.

CSLEA Political Consultant Peter Mitchell updated the board on mid-term elections, the effort to recall Governor Newsom, special elections and initiatives.  Mitchell acknowledged that some voters struggle with their political affiliation as it relates to future retirement security when making choices on a ballot.

COVID-19 / CalHR Discussions: CSLEA directors conducted a lengthy discussion regarding CalHR’s directives requiring unvaccinated state employees to wear masks and to be tested for the virus.  CSLEA Chief Counsel Kasey Clark briefed the Board on the legal standing that CalHR has in implementing these measures.  Case precedent supports the directive.   Directors discussed members’ feedback and how to best address concerns on both sides.  Clark said CSLEA continues to meet and confer with CalHR on these issues.

CSLEA Dues Adjustment: CSLEA directors approved a membership dues adjustment that is consistent with the CSLEA constitution and historically matches the percentage of Bargaining Unit 7 general salary increases, in this case the adjustment amounts to $4.30 a month.  This is the first dues adjustment since 2019.

Changes in Affiliate Leadership Due to Promotion/Retirement: In closing, CSLEA Director Shawn Fry, president of the Association of Conservationist Employees (ACE) announced that he would be stepping down from his position due to a promotion.  In addition, CSLEA Director Bruce Todd, president of the California Association of Fraud Investigators (CAFI) announced his plans to retire from state service.  The CSLEA Board applauded both directors for their service and dedication to CSLEA members.

CSLEA Unit A Vice President and AMVIC President Dr. Kenny Ehrman: “As always it is my honor to serve on the CSLEA Board of Directors to work collaboratively to protect the rights and benefits of our public safety members.”

CSLEA Director and CACI President George Tiongson: “We are finally returning to normal by having an in-person Board meeting.  It was good to see all the directors.  I want to welcome Department of Cannabis Control (DCC) sworn peace officers into CACI.  They were previously DCA investigators.  Nothing changes, but we welcome the new agency and additional members to come.  CSLEA is working directly with the Governor’s office and DCA/DCC regarding the telematics exemption and continue to have an open dialogue with CalHR regarding Covid-19 testing, vaccinations and masking requirements.”

CSLEA Director and CAFDI President Joel Lambert: "As the newly elected president of CAFDI, it was a rewarding experience to meet many of my colleagues in person for the first time. It was encouraging to see all the hard work that goes on behind the scenes to ensure that we remain a strong and unified organization."

CSLEA Director and CAFI President Bruce Todd: “I continue to be impressed by the passion, experience and dedication of the Board members, CSLEA legal staff and our political consultants.  We had a lively discussion regarding CalHR’s recent statements regarding COVID-19 vaccinations and testing.  CSLEA continues to engage in discussions with the State to protect our members interests in light of the constantly changing status of these policies.”

CSLEA Director and COLRE President Enrique Razo: “Examiners of California, you are strong and vibrant.  You fight the daily elements, natural disasters and a pandemic that continues to threaten.  CSLEA will always support you and your families.”

The CSLEA plans to meet at least twice prior to the end of the year.