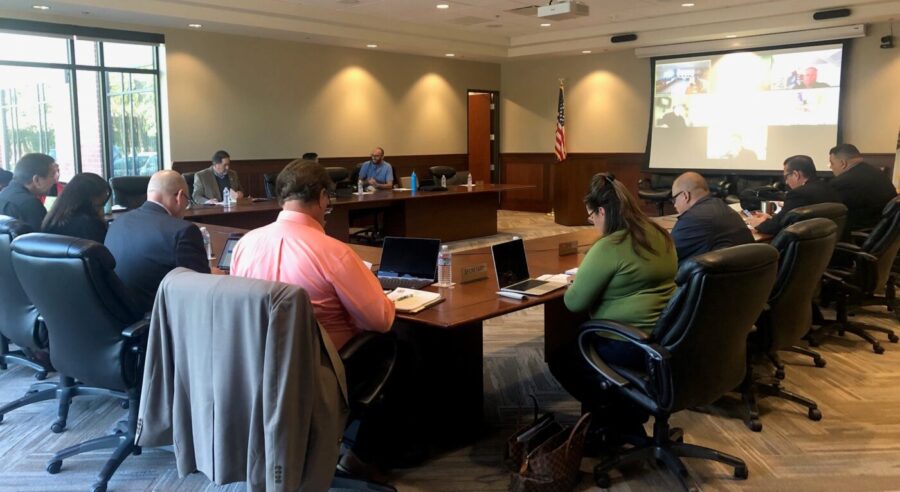 SACRAMENTO- On March 29, 2022, California Statewide Law Enforcement Association (CSLEA) officers and directors met at CSLEA headquarters and via videoconference for staff and consultant updates and to discuss issues and actions that impact CSLEA members.  The board welcomed the return of Director Paul San Gregorio, president of the California Association of Fraud Investigators (CAFI). San Gregorio previously served on the CSLEA Board from 2012-2018.  CSLEA directors also welcomed Association of California Wildlife Officers (ACWO) Vice President Mike Milotz who was filling in for ACWO President Ryan McCoy.

“The goal of our Board of Directors meeting is to work toward improvements for our members so that they, their careers, and their families can thrive,” said Alan Barcelona, CSLEA president.  “Given the challenging times that we are currently in, we have our work cut out for us.  A lot goes into the work that we do for our members including working with our legislative and political consultants on legislation and elections, working with our legal and negotiations team to preserve and increase pay and benefits, and of course our CSLEA staff.”

The Board received updates from CSLEA Political Consultant Peter Mitchell and Legislative Advocate Shane LaVigne.  Mitchell reviewed elections and polling on the local, state and federal level.  He discussed the issues facing politicians as well as CSLEA members, including inflation, rising crime, elevated gas prices, COVID-19, and homelessness. Mitchell pointed out that CSLEA directors have worked for and gained political strength and the importance of being able to reach out to legislators and those in constitutional offices.

Legislative Advocate Shane LaVigne updated directors on activities in the Legislature, the release of the State budget and the awaited May revise, the introduction of a large number of bills and how the legislative year is shaping up.

Always fighting for the rights of CSLEA members, CSLEA Chief Counsel Kasey Clark updated the board on the legal work that is taking place on behalf of CSLEA members.  He discussed cases for review by the CSLEA Legal Representation Committee and reported that CSLEA’s Legal Defense Fund (LDF) now has approximately $2.5 million in assets.  This is a fund that members contribute just $2.00 a month to.

CSLEA CFO Ricardo Sanchez spoke to the board about CSLEA’s budget and membership including membership outreach and retention.   The update sparked a discussion about union benefits, membership rewards and merchandise, the CSLEA sponsorship program, and the different types of additional benefits that some CSLEA affiliates offer to their members.

“Not being a union member is like driving without car insurance,” said Sanchez.  “I ask people to be responsible for their families and become union members if they are not already.  Union membership is job protection.”

CSLEA Unit A Vice President and Foundation Chair Kenny Ehrman advised the Board that CSLEA scholarship applications are now available, applications are being received at CSLEA headquarters and scholarships will be awarded by the end of August.  CSLEA is awarding eight $1,000 scholarships.  “It is a thrill to call the recipients and their parents to let them know they’ve been awarded a scholarship.  Our members are raising some incredibly bright children with bright futures,” said Ehrman.

Chief Counsel Clark wrapped up the meeting with an update on COVID-19 related items as they pertain to CSLEA members in the workplace and essential worker pay.  He acknowledged the frustration CSLEA members and CSLEA are experiencing due to a lack of meaningful conversation about essential worker pay with CalHR.  “We can speculate as to the reason but after numerous and repeated inquiries, we have not been able to push CalHR to address this in any meaningful way,” said Clark.

“As COVID seems to be behind us now, we can refocus on things that matter, including upcoming negotiations, hazard pay and pressing legislators to ensure we maintain our peace officer rights,” said CSLEA Director and California Association of Criminal Investigators (CACI) President George Tiongson.  “Unfortunately, even with pressing CalHR and the administration, we still have no movement on essential pay.”

“Another great meeting and update from our analysts, legal and executive team,” said CSLEA Unit-B Vice President and CARII President Tom Ineichen.  “It is a bit disappointing to hear that the essential worker compensation has not been resolved yet with the state, not for lack of effort on CSLEA’s part.  Some of our CSLEA directors shared with us news about the COVID related deaths among their co-workers and the impact on our families as we worked through the pandemic.  I am hoping the state will come to the table on this soon.”

“I can assure you that we will not rest until the state recognizes that state employees in Bargaining Unit 7, including our DMV examiners, are a vital asset to public safety.  The time is now for the State to realize that we are still on the frontlines against this pandemic and deserve our hazard pay,” said CSLEA Director and Coalition of Licensing Registration Examiners (COLRE) President Enrique Razo.

“I would like to highlight the work that CSLEA and the State Parks Peace Officers Association of California (SPPOAC) did on getting COVID sick leave and quarantine time off covered by admin time off so our membership was not penalized for the cost of COVID and they are recognized for working hard every day during the pandemic,” said CSLEA Director and SPPOAC President Matt Yarbrough.