There are approximately 98,000 licensed establishments in California, with an average of 11,000 applications made each year. Although the majority of businesses are run in an orderly fashion, some present public safety problems. For all the violence and illegal activity that goes on in licensed premises, there are only 115 agents  dealing with enforcement and 76 licensing representatives to process all the applications for the entire state.

The number of agents is in a constant state of flux. Many are lured away by other law-enforcement agencies offering a better salary, paid overtime compensation, weekends and holidays off, and, as a result, an improved family and personal life.

As fully sworn peace officers, ABC agents must be ready at all times to respond to emergencies. An ABC agent's job is not just limited to bars and liquor stores, but – post 9/11 -- is an important part of the state and nation’s law-enforcement fabric. Local law enforcement agencies request ABC agents to assist in many undercover operations. Some of these undercover operations include penetrating drug rings, fencing operations, and even posing as prostitutes in crime-infested neighborhoods. ABC agents  also work side by side with local, state and federal law enforcement agencies on several task forces to preserve our Homeland Security and combat organized crime.

ABC currently has agents assigned to the following Task Forces: 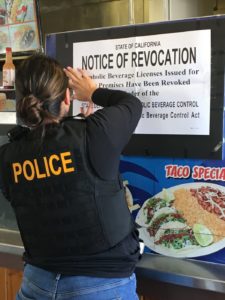 ABC Licensing Representatives are first line of defense in the prevention of alcohol related crimes. They work together with the applicants and the community to ensure a positive business operation which will not interfere with the nearby residents, schools, churches, hospitals, or create a law enforcement problem for the local law enforcement agency.

It is their job to make sure that a thorough and complete investigation is done into the applicant’s moral character and financing, as well as each premises and the surrounding area. They work diligently with other state, city and county agencies to ensure proper zoning and compliance requirements are met. They testify at hearings before an administrative law judge, to justify our approvals or denials of protested applications. At these hearings protestants address their concerns about the licensing of premises within their communities.