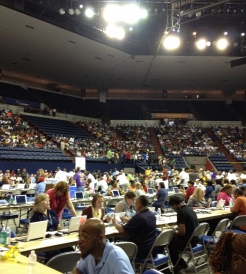 A Folsom father of four and his three colleagues from Sacramento, all IT and telecommunications experts with the state of California, are getting quite a kick out of all the attention they are getting this week.  After all, computer tech work is their expertise and their job.  So why are they in the spotlight?  Their job site.  It is not in California. It is states and states away in Louisiana.  The four specially trained technicians, three from the California Emergency Management Agency (Cal EMA) and one from the Department of General Services (DGS), are the center of a huge recovery effort assisting the victims of Hurricane Isaac.

It is a 14-16 hour day, two week mission at the Lakefront Arena assistance center where 90 thousand victims in need of help are expected to file through and that is at just one of the nine assistance centers set up in Southern Louisiana.

"Picture Arco Arena, full of people lined up outside, going up the ramp, finding their way to a seat , only to wait 45 minutes to an hour to see a representative from the state," said Cal EMA's Mike Beckstrand during a phone call with California Statewide Law Enforcement Association (CSLEA) Communications Director, Teri Cox.

Beckstrand and his colleagues helped to set up the computer network  for a brand new web-based financial assistance program.  They basically went in to an arena filled with long tables and chairs and went to work on setting up at least  200 laptops.  They tested all the wireless networks and put down a lot of cable for Internet connections.  They are among 40 IT and telecommunications technicians from across the nation who were called upon for help.

And now that hurricane victims are coming through by the thousands?  "It really boils down to whatever needs to be done, we're doing it.  It's service with a smile," said Beckstrand.

The four find themselves doing a lot of trouble shooting, fixing networking, log-in, and computer issues.  They said hurricane victims, seeking assistance for food that  perished in their homes after a four-day power outage, are shocked to learn these computer experts are from California.  "They brought you all the way out here to help us?" Beckstrand said that is the reaction.  The reply the California techs give back?  "If it (disaster) happens in California, we expect to see you, too."

Beckstrand has four children at home in Folsom and admits it is difficult to have Dad gone for such a long period of time but at the same time, he said, being in Louisiana is an honor,   "I'm here to support the people of Louisiana on behalf of my agency."

Chris Raynes, an information system analyst with Cal EMA, shares that feeling.  He lives with and looks after his mother so he does "a lot of checking in" with her while he is away.  He is also surprised to learn of all the attention from back home in Sacramento.  "Friends, co-workers, it's kind of exciting," said Raynes during a conference call with CSLEA, Cal EMA and DGS.  Raynes and his colleagues update the folks back home via blogs, photos and text messages.

"I heard they were surprised that we were calling in to check on them," said CSLEA President Alan Barcelona.  "If they're part of our CSLEA family, of course we want to see how they're doing, thank them for the job they're doing and shine the spotlight on their commitment to helping people in times of emergency.   They're a shining example of what Cal EMA does well."

The new web-based financial assistance program they are helping with was launched by FEMA.  Once a person in need of aid gets to sit down with a representative from the state of Louisiana, the process of getting help is just five minutes long.  The state issues electronic benefit transfer (EBT) cards.  "They really made it a lot more organized," said Raynes. He added, "This will help to better our response in the future for California emergencies."

The four are in awe of the number of victims coming through in search of financial aid and said, for the most part, things are running smoothly. "For Katrina it took a month and a half to do what they're doing now," said Dominick Pedicino, a system software specialist for Cal EMA.

They did say troops from the National Guard and State Police had to come into the arena to squelch a small uprising on the first day of public assistance.  Apparently there was some confusion when relief works returning from lunch started calling the wrong numbers and suddenly the "first come, first served" procedure was thrown into chaos.

The four expect to be worn out after such long days for such a long period of time. They arrived in Louisiana on Labor Day and could be there through September 16th.