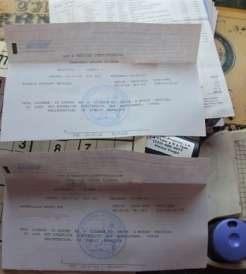 When the California Department of Motor Vehicles (DMV) got a tip that someone was making phony temporary California driver licenses and selling them, our California Statewide Law Enforcement Association (CSLEA) members who are DMV investigators went to work.

"This type of illegal activity puts the public at great risk," said California Statewide Law Enforcement Association (CSLEA) President Alan Barcelona.  "It leads to identity theft and  people behind the wheel when they shouldn't be."

"This is what we do," said Kenny Ehrman, president of the Association of Motor Vehicles Investigators of California (AMVIC) and DMV investigator.  "We investigate cases day in and day out to protect consumers from fraud and the public from harm.   We have DMV investigators in almost every task force in California, we have our own computer forensics team, we have investigators assigned to various FBI counter-terrorism task forces.   We put an end to this one counterfeit I-D mill and will continue to shut down others."