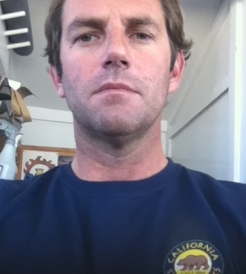 It is not typically in the job description of  state parks department lifeguards to play referee but it is their job to come to the rescue, so it is no surprise that they are assisting with sick sea lions  stranded at Huntington Beach.

"We are not as hands on in the rescue of these seals as the news report made it seem," said California Statewide Law Enforcement Association (CSLEA) member and state lifeguard R. Chris Egan.  Egan was recently interviewed about the record number of sea lions becoming stranded and in need of rescue at Huntington Beach.  "The main thing is we're keeping people safe from the seals. People are inquisitive, they want to interact with the animals, but they're sick and could become aggressive."

In extreme cases, Egan said lifeguards will become hands on with the seals, but it is a job best left to the marine mammal rescue groups.  The hungry, weak and sick sea lions are leaving the water and parking themselves on the beach and near picnic tables.  Beachgoers are inclined to interact with them and attempt to get them back into the water.

Egan has worked as a lifeguard at Huntington Beach for 22 years and said 2013 has been a real dramatic year in the number of seals stranded.   Researchers are trying to determine why so many seals are sick, but they are certain the seals  are leaving the water, seeking warmth.  The sea lions are starving and don't have the body fat they need to keep warm in the water.

"We'll continue to step in between seal and beachgoer," said Egan, "Just to keep people safe.  We have to tell people shooing the seals back into water is the wrong thing to do and will actually make the seals sicker."

"Our CSLEA members who are lifeguards with the state parks department are true public safety professionals," said CSLEA President Alan Barcelona.  "The goal is to keep everybody safe from harm and that's exactly what Chris Egan is doing."