Clues From The Wreckage The Work Of A Motor Carrier Specialist 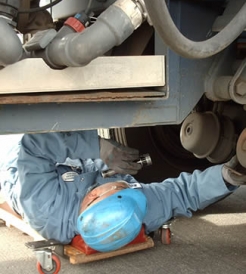 When two vehicles smack into each other in a fatal head-on collision,  sometimes  it is only the wreckage of that crash that holds the clues as to what happened.  Sometimes pieces of that wreckage are crushed or burned beyond recognition.  What caused one of the  drivers to cross over into the path of an oncoming car?   Was it human error, drugs or alcohol,  a driver who fell asleep, or a mechanical malfunction?   Only a detailed investigation can reveal what happened, why it happened and who, if anyone, is to blame.

"That's where our California Statewide Law Enforcement Association (CSLEA) members who are CHP motor carrier specialists come in," said CSLEA President Alan Barcelona.  "There is a motor carrier specialist on every CHP Multidisciplinary Accident Investigation Team, and for very good reason, for their impeccable mechanical and investigative expertise."

"It's slow and methodical as we try to piece a vehicle back together," said CSLEA member  and CHP Motor Carrier Specialist Jerome Cantrell.  "We dig through the layers.  What made that driver go over to the other lane, was it dui, sleep or mechanical?  Did a tire blowout cause the accident, or was it the result of the accident?  That's what our  detailed investigation would reveal."

A CHP motor carrier specialist was part of the team that investigated  the death of a 25-year-old woman who, during a fight,  fell out of a party bus on Highway 17 near Los Gatos in July 2012.  The investigation revealed the vehicle was not properly maintained.   The owner of the bus company was then  indicted on vehicular and voluntary manslaughter charges and subsequently arrested.

MAIT is also investigating the limousine fire on the San Mateo bridge that claimed the lives of five nurses trapped inside.

"We spend a lot of time researching parts, equipment, writing reports, in court as expert witnesses," said Cantrell.  "And there is no shortage of work.  As soon as I'm done writing a report, another case is waiting for me."

Cantrell, a motor carrier specialist since 2005, joined MAIT in 2011.  His job is unique in that he is also called upon to investigate officer-involved shootings involving outside agencies.  "Some local law enforcement agencies will call us in on homicides to do the scene diagramming," said Cantrell.

CHP motor carrier specialists had the unique job of assisting emergency personnel with supplies in the aftermath of  the 6.9 magnitude, 1989 Loma Prieta Earthquake in the San Francisco Bay Area.

"We work side by side with uniformed officers," said Cantrell.  "We save lives."