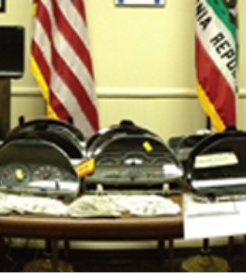 "Some of these vehicles are traded in at dealerships and resold to the unsuspecting public," said Kenny Ehrman, DMV investigator and president of the Association of Motor Vehicles Investigators of California (AMVIC).  "This crime of unlicensed dealers is a huge problem in California and DMV Investigations is the only law enforcement agency that has the expertise and training to combat this crime."

The arrests are the result of a 10-month investigation that began when a victim/car buyer attempted to register a vehicle that had considerably less mileage than what was on file at the DMV.  The vehicle was originally advertised on Craigslist and DMV investigators soon discovered the seller(s) had posted more than 180 vehicles for sale in a 15-month period. The cars for sale were 2003-2007 Toyota Corollas and Honda Civics.

"DMV investigators are champions at protecting consumers, often struggling families, who save hard-earned money for a vehicle," said Alan Barcelona, president of the California Statewide Law Enforcement Association (CSLEA).  CSLEA represents DMV investigators along with 7000 other law enforcement, public safety and consumer protection professionals who work for the state of California.  "These investigators work daily to protect consumers from fraudulent dealers and transactions."

A search warrant was served in Fresno on June 13, 2013, which resulted in the seizure of odometer clusters, cash, computers and ledgers that detailed each vehicle sold. Based on the seized ledger information, it is estimated, the ring profited approximately $296,000 over a two-and-half year period with the sale of more than 212 vehicles with altered odometers.