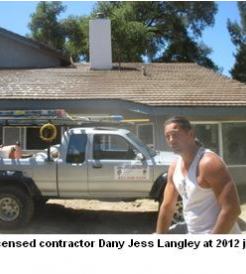 In an ongoing effort to protect Californians from falling prey to unlicensed contractors who perform substandard work and put the safety of others at risk, our California Statewide Law Enforcement Association (CSLEA) members who are investigators with the Contractors State License Board (CSLB) are warning consumers about an unlicensed contractor who faces multiple felony charges and is due in court next month.

"Investigators believe this unlicensed individual did electrical work for his customers and that work was, not only substandard, but dangerous," said CSLEA President Alan Barcelona.  "CSLB investigators are dedicated to keeping Californians safe by arresting those who contract without a license and warning those who may be victims."

CSLB investigators are asking  anyone who has had work done by Danny Jess Langley of Langley Construction to contact them.   Langley operates throughout the Central Coast region and  may have put his customers at risk by performing electrical work that does not meet state codes and presents a fire hazard.

Langley pleaded guilty to unlicensed contracting in 2011 and in 2012 was located at a Carmel Valley job site.  Langley uses the state contractor license number 657400  which was never issued to him.  He is believed to be working in the Central Coast.

Investigators say he asks unsuspecting consumers to pull owner-builder construction permits from local building departments since he is unable to as an unlicensed individual. This places property owners at financial risk for project costs, employee payroll and jobsite injuries.   He faces multiple felony charges at a trial set in Monterey County next month.

Anyone who was previously or currently is working with Langley for any type of construction work is asked to contact either CSLB’s Monterey SWIFT office at 831-620-1374 or Fresno SWIFT office at 559-490-0580. If Langley has performed work on your property, CSLB encourages you to have it inspected by a qualified building inspector.