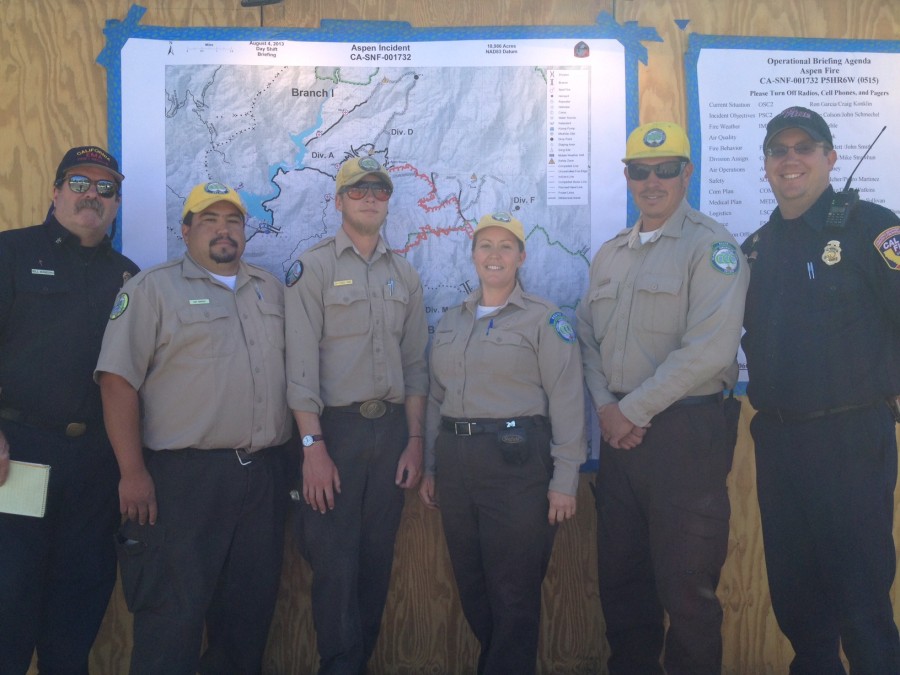 Sixteen to 18 hour shifts, sleeping on the ground in rugged terrain, hot temps, smoky air  - that's a week or more in the life of a California Statewide Law Enforcement Association (CSLEA) member out in the Sierra National Forest working to contain the Aspen fire near Lakeshore.

"These folks have been here supporting the Type II Incident Management team since July 26, sleeping on the ground and working 16 to 18 hour shifts," said Bill Bondshu, president of the Fire Marshal & Emergency Services Association (FMESA) and one of the CSLEA members assigned to the Aspen fire.  Bondshu is at the fire as the Cal-OES Agency Representative taking care of the 30-plus overhead positions on the fire as well as numerous strike teams of engines and water tenders.

The lightning-sparked fire, north of Fresno, started on July 22 and grew to more than 20,000 acres.  Flames raced across steep, rugged terrain which made firefighting difficult.  The fire is now 75% contained.  Full containment is not expected until August 10.

Also working the Aspen fire is CSLEA Member and FMESA Vice President Darren Watkins.  Watkins  is serving as the Communications Unit Leader. He is responsible for all the communications infrastructure on the fire making sure that crews, engines and aircraft can communicate effectively and safely.

There are approximately 2000 people assigned to the incident and approximately 300,000 personnel hours have been expended in fighting and supporting this incident.  The cost of the fire is $21.5 million to date.

"These public safety professionals are away from their families weeks at a time as they protect property, communities, neighborhoods and lives," said CSLEA President Alan Barcelona.  "It is not an easy work environment but they get the job done.  I thank each and every one of them for their dedication and professionalism in protecting Californians and working with federal and local agencies to do what needs to be done."