"We had a fire on Monday, August 13th, which was caused by troops training and another on August 15th in the same area," said Steven Bradley, firefighter-security officer, president of the  State Employed Fire Fighters Association (SEFFA) and member of the California Statewide Law Enforcement Association(CSLEA).   "We called upon the San Miguel fire department  and CALFIRE from Monterey and San Luis Obispo to assist us with firefighting operations."

It does not take long for the Camp Roberts Fire Department to become overwhelmed by increased calls for service and fast-moving fires .  "Due to the budget crunch, we  have low staffing levels at the Camp Roberts Fire Department," said Bradley.  "Even though troop training has increased here.  We have fewer firefighters but an increase in population and now this summer, a hot, dry, active fire season."

The fire on August 15 was in a rugged and remote section of the post making it difficult to access with ground equipment.

"In addition to the typical dangers, fires present, here at Camp Roberts we have to be concerned about unexploded ordinances  on the post," Bradley said.   Camp Roberts has been a premier training site for military troops since 1941.  It is not uncommon for  multiple rounds and explosions to  occur during firefighting operations.

Luck and skill were on their side when San Miguel Engine 8668 arrived under the command of CSLEA member  Kevin Byrne.  Byrne is a firefighter-security officer at Camp Roberts but, that day,  was working as a volunteer firefighter serving his community. 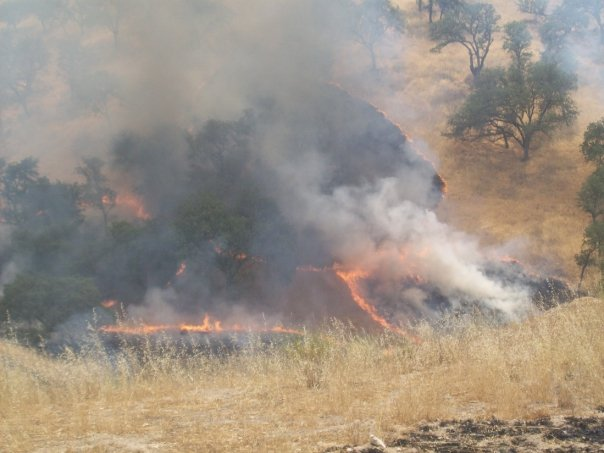 The fire took hours to contain and  Camp Roberts Fire Department remained on the scene hours after that.

"Very few Californians are aware of our CSLEA members who are firefighters-security officers at state military facilities like Camp Roberts," said CSLEA President Alan Barcelona.  "We also have firefighter-security officers at Hearst Castle, Yountville Veterans Home, The state hospitals at Atascadero, Coalinga, Napa and state developmental centers Sonoma, Porterville and Lanterman.  These men and women not only perform their specific jobs, they  also offer mutual aid to their surrounding communities and are often the first emergency responders on scene. "