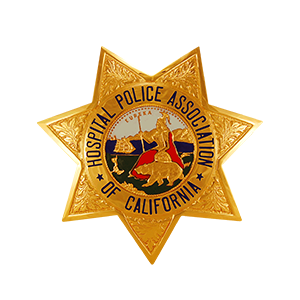 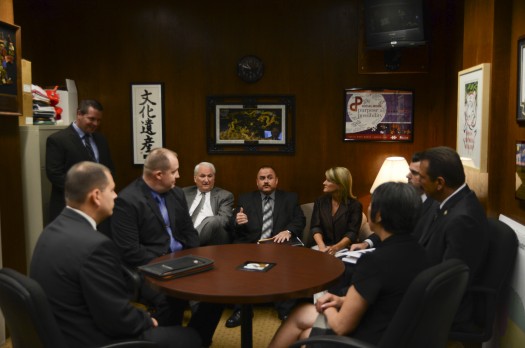 Among the safety concerns discussed, Navarre spoke of the potential dangers outside of the secured treatment area at Napa State Hospital where the criminally insane are transported into the community by unarmed peace officers as many as 10 to 12 times a day.  "In 2010, 16% of the patients at Napa State Hospital were in for homicide, 37% for assault and battery and 11% for sex offenses," said Navarre.  "That's two-thirds of the patients at Napa State Hospital that have committed violent crimes." There was also discussion on the previous incidents involving armed suspects on State Hospital grounds and the increase of deadly threats being made at State Hospitals regarding armed suspects coming onto facility grounds to inflict deadly force on state employees.  Navarre said that safety improvements must be made for the safety of the officers, however, without the authority for the officers to carry a firearm, the patients, staff, and community are at risk.

Currently, all patients that are brought into a State Hospital are brought in by armed officers, most likely correctional officers or deputy sheriffs.  Also, whenever a patient needs to go to court regarding their commitment to a state hospital, an armed deputy sheriff performs the transport.  However, whenever these same patients need to be transported out into the community for a medical emergency or a doctor appointment, unarmed Hospital Police Officers conduct such duties.  Interestingly, the State has armed correctional officers at Patton State Hospital (San Bernardino County) and Coalinga State Hospital (Fresno County) to perform patient transport.  Therefore, the Department is leaving the counties of Los Angeles (Metropolitan State Hospital), San Luis Obispo (Atascadero State Hospital), and Napa (Napa State Hospital) more vulnerable.  Navarre asked, “Why is the Department choosing to protect the citizens of San Bernardino and Fresno Counties more than the others?”

Officer Johnson voiced concern about the increasing number of gang members at Napa State Hospital.  "We have been seeing more and more gang members being admitted to the hospital," said Johnson.  "Gang members can call anyone they want to from the hospital and then we transport them into the community unarmed."

Assemblymember Yamada said she is planning a field hearing in October to further discuss safety concerns within State Hospitals and Developmental Centers.  She also discussed the possibility of improving officer training for hospital police officers.   Officer Jimenez told Assembymember Yamada Hospital Police Officers should be provided with uniform and standardized law enforcement training (POST Certified Training), as well as ongoing training (perishable skills training), which is not being provided at all State Hospitals. 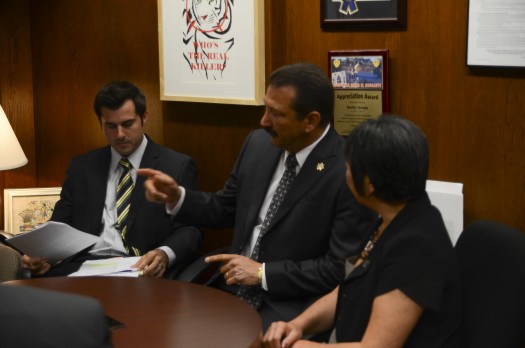 "I am encouraged by Assemblymember Yamada's knowledge of what goes on in and around these facilities and by her interest and concern for officer and community safety," said CSLEA President Alan Barcelona.  "We will continue to assist her with the necessary information she may need to ensure changes are made to better protect patients, police and the public."

"Instead of waiting for something tragic to occur, we are calling on state leaders to be proactive," said Jimenez.  "We have raised and waved red flags for years, regarding these concerns with no cooperation from the Department.  It is my contention that the Department of State Hospitals needs to recognize the dangers their employees face on a daily basis are not just limited to the Secured Treatment Areas, but also include the areas outside the Secured Treatment Areas as well. It’s long overdue for the Department of State Hospitals to start taking a proactive approach, rather than a reactive one and provide our officers with the equipment they need  in order to provide a safer working environment for our DDS Peace Officers / DSH Hospital Police Officers, and all Department of State Hospital Employees,  as well as the communities they serve."

On  August 21, HPAC and CSLEA have scheduled a meeting with new Office of Protective Services (OPS) Director Ken Hill and Health and Human Services Law Enforcement Consultant Frank Parrish to discuss the July 2013 Bureau of State Audits Report Findings and Recommendations.   Also to be discussed are the safety concerns at the Developmental Centers and State Hospitals.