Hot August nights filled with thick, black smoke and raging, bright orange flames have evolved into a more subtle September  near Yosemite National Park, as the Rim Fire rounds the corner to containment.   The 256,528 acre, monster fire is now 84% contained, with containment expected September 20.  The fire started August 17. The Rim Fire is the largest fire ever recorded on the Sierra Nevada Range and ranks as the third largest fire in California history.

"From the beginning  some of our California Statewide Law Enforcement Association (CSLEA) members were called upon to help," said CSLEA President Alan Barcelona.  "Many of them spent weeks at a time away from their families and in hot, smoky conditions .  Some are still there."

Bill Bondshu, CSLEA Board Member and President of the Fire Marshal & Emergency Services Association (FMESA) spent more than three weeks at the Rim Fire.   He had barely returned home from the Aspen Fire when duty called again.  From the Aspen Fire, he reported CSLEA members assigned to the fire slept on the ground after working 16-18 hour shifts.  At the Rim Fire, Bondshu  assisted with three other CSLEA members, Ishmael Messer, John Clary and Gary Humphrey all Assistant Chiefs with Cal OES Fire.

CSLEA Member & Conservationist II Hector Garcia spent 14 days  at the Rim Fire.   Conservationist II, CSLEA Board Member and Association of Conservationist Employees (ACE) President Jim  Kastner has just been sent in to replace him.  "The fire is 84% contained and there will be a lot of rehab," said Kastner.  "There are three CCC crews at my camp in Tuolumne and they will time out this week, 14 days, so I will order replacements.  The camp will probably be around for another week or more." 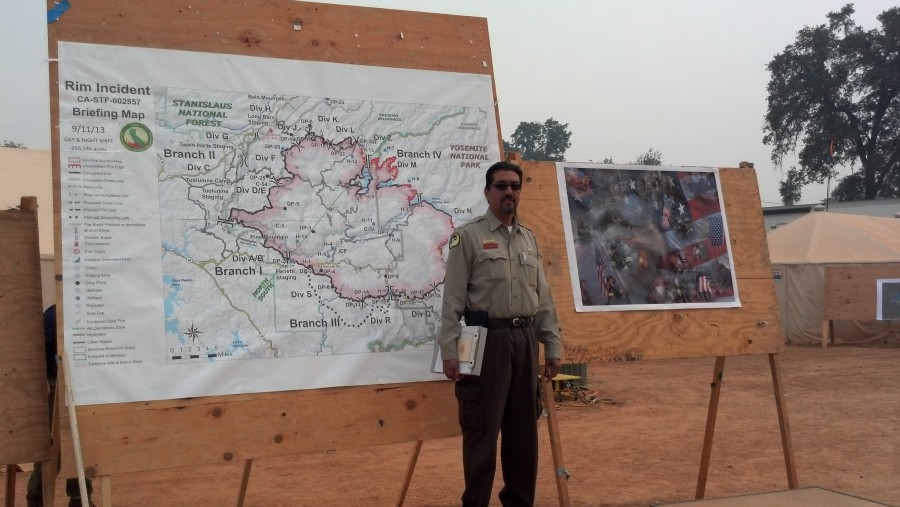 "These are the members we have communicated with," said Barcelona.  "Other CSLEA members are out there right alongside them.  And still others have been assigned to other firesin California.  We thank them for their service and wish them a safe return to their families."

For Photos Of The Rim Fire & Those Who Fought It