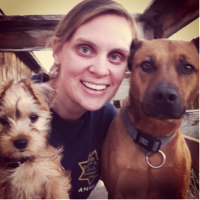 For six and a-half years, California Statewide Law Enforcement Association (CSLEA) Member Samantha Dee has worked as a CHP Public Safety Dispatcher at the Golden Gate Communications Center.  She answers calls for help and dispatches officers to respond to those in need.  Sometimes those calls involve someone who is attempting to take his or her own life and that strikes a personal chord with Dee who has had her own struggles with depression and who has, also, at one time, tried to end to her own life.

"I had my own personal struggles and attempted," Dee said, as she explained her personal and professional reasons for participating in the 10th Annual Out of the Darkness San Francisco Walk at Lake Merced Sunday, September 22.   A walk for the American Foundation of Suicide Prevention (AFSP).  "Working the radio and seeing how often it happens, it's so sad.  Some of these people are so young and what seems huge and powerful now, in five years won't even matter.  They don't see the big picture."

There was a time when Dee could not see the big picture.  "This is the first time I have been quite so public about this," Dee wrote on her page for pledges supporting her in the walk.  "Many of you may not know that I had my own personal struggles with an attempt a few years ago. I have worked hard and had awesome support from those around me. It's my turn to try and help others while also continuing to fight this battle for myself. "

"I am very proud of how Samantha is overcoming her struggles," said CHP Public Safety Dispatcher and President of the CHP-Public Safety Dispatchers Association Tina Brazil.  "Unfortunately there are other people, other dispatchers, who do not know how to reach out for help, especially in our profession.  We don't want to look incapable.  I hope her story helps others."

Dee knows it is tough for people to donate these days, so she has held her own private bake sales to raise money for the walk.  "I'm lucky, I have so many supportive people in my life," said Dee.  Walking alongside her September 22 will be her mother, her sister, her dog, friends and  coworkers.  "The walk brings exposure for people to be aware that this is such a huge problem."

From the AFSP website: "In the United States, a person dies by suicide every 13.7 minutes, claiming more than 38,000 lives each year. It is estimated that an attempt is made every minute, with close to one million people attempting suicide annually. Suicide is the fourth leading cause of death in the U.S. among adults 18-65, the second leading cause of death among teens and young adults, and individuals ages 65 and older account for 16 percent of all suicide deaths. This is a public health issue that does not discriminate by age, gender, ethnicity, or socio-economic status."

"CHP public safety dispatchers are the calm, steady rock of reason and safety when an emergency is unraveling," said  CSLEA President Alan Barcelona.  "They absorb so much over the phone, so much over the radio, we may lose sight, that at times, they may need our help, our support.  They are a special group of professionals who are there for us when we call 911."

As a CHP Public Safety Dispatcher, Dee has answered 911 calls from people who feel suicidal, she has answered calls from people witnessing an attempt at suicide, she has dispatched officers to intervene.  "As dispatchers we're so detached from the actual event, we don't hear how a suicide or a suicide  attempt impacts that person's family, friends and community.  But I know.  I am affected so greatly by the ones we deal with in our center.  I cry at almost every single one of them."

The Golden Gate Communications Center is one of the busiest in the state.   It is not uncommon for dispatchers to get reports of distraught or depressed people on the Golden Gate Bridge or on a freeway overpass.  It is not uncommon for them to speak directly to a person considering suicide.  The calls come in among calls reporting drunk drivers, accidents, fires, roadside emergencies.  Ask Dee about some of the major disasters or emergencies she has dealt with as a dispatcher and she will tell you, "Not a lot, I kind of have a white cloud over my head."

A "white cloud."  A far cry from the "dark clouds" that once consumed her.