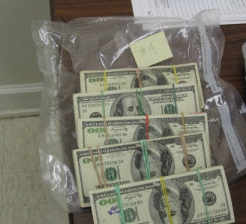 "Thanks to the thorough investigation by the Franchise Tax Board and the Department of Justice, we were able to secure a conviction...." - Marin County Deputy District Attorney Sean A. Kensinger

A Marin County man who failed to report nearly $1 million of income from his marijuana operations pleaded guilty November 19, 2013  to six felony marijuana cultivation, filing false tax returns and money laundering charges.  The charges stem from a lengthy, complex  investigation by the Franchise Tax Board (FTB) and the Department of Justice (DOJ) which began in 2011.

Alan Flaks, 55, accepted a plea agreement including more than five years in prison, $200,000 in restitution to the state for back taxes and investigative costs, $20,000 in fines, and the forfeiture of $190,000 seized in the investigation in exchange for the dismissal of numerous other charges against him and the dismissal of charges against a woman who was living in his home in San Anselmo at the time of the investigation.

Flaks was running sophisticated indoor marijuana operations in his home  in San Anselmo, another home in San Rafael and a third one in Arcata.  During the 2011 search warrant, agents from FTB and DOJ Bureau of Narcotic Enforcement seized more than 1,500 marijuana plants, 100 pounds of marijuana, and $200,000 in cash.

From 2004 to 2010, Flaks failed to report nearly $1 million of income from his marijuana operations. He structured cash deposits by breaking them into smaller amounts to avoid the Currency Transaction Report filing requirements. He also laundered money from his indoor marijuana growing operations to pay for expenses to promote and carry on his illegal activity at his home and two other sites.

"Thanks to the thorough investigation by the Franchise Tax Board and the Department of Justice, we were able to secure a conviction which requires Mr. Flaks to repay the People of California the taxes he owed as well as the cost of the investigation which led to his conviction and prison sentence," said Marin County Deputy District Attorney Sean A. Kensinger, who prosecuted the case. "We believe the interests of justice are well served with this result."

"This case highlights the exceptional work FTB and DOJ agents do year round," said Alan Barcelona, president of the California Statewide Law Enforcement Association (CSLEA).  CSLEA represents FTB and DOJ agents along with nearly 7,000 other law enforcement, public safety and consumer protection professionals who work for the State of California.  "FTB agents make dozens of arrests each year, they execute search warrants and they see their cases through to conviction. This should also put those who make money through illegal means, on notice.  Income, even from illegal sources, is taxable and FTB agents will catch up with you."

Flaks is scheduled for sentencing on December 18, 2013 by Marin County Superior Court Judge James Ritchie in Department J. He faces 5 years and 4 months in prison along with restitution and fines.