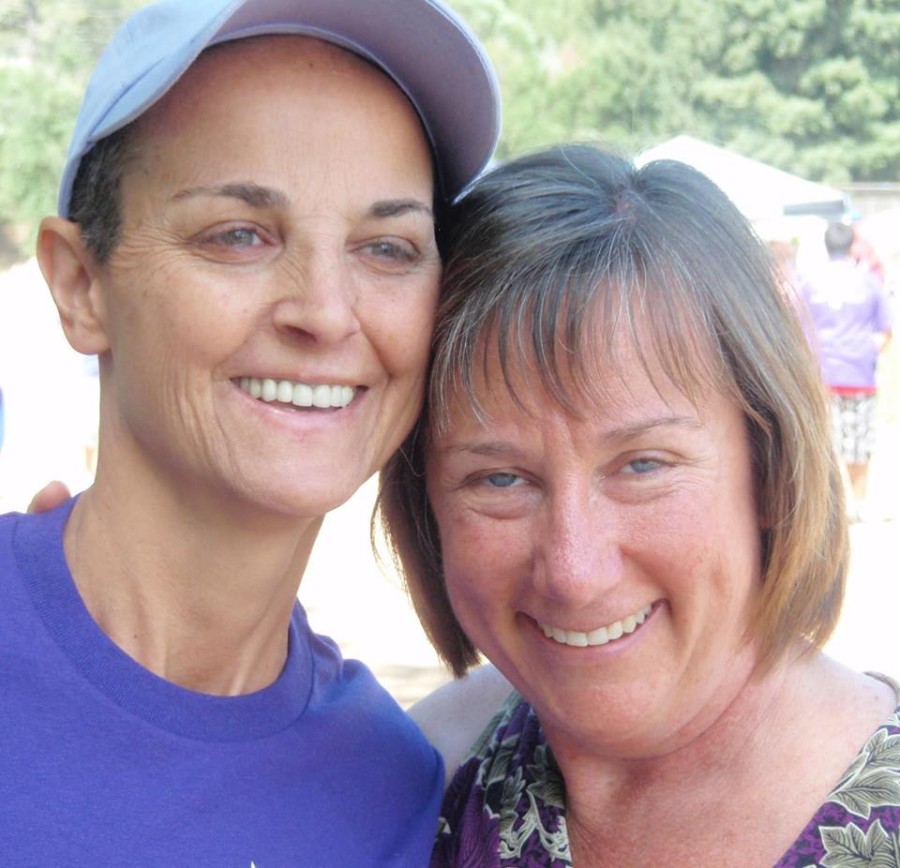 "She loved the department and loved what she did.  Never did she let her illness get in the way, she never wanted to bring people down." -  Victor Tovar, CHP-PSDA Vice President

"We waited for all of her friends and relatives to travel here," said Lois Cook, Lynde's mother.  "Lynde told us all, 'when I die, don't cry for me, pour the champagne and raise a glass.'"

For 12 years, Lynde worked as a CHP Public Safety Dispatcher in Ukiah, the small town she was born and raised in.   She loved answering calls for help.

"Lynde started working for the CHP in 2000, right here in the Ukiah Communication Center where she stayed her entire career," said Captain Jim Epperson, CHP Ukiah Area Commander.   "She was a very reliable and dedicated worker.  She was always willing to help whenever and wherever needed.  She had a true passion for dispatch!"

When Lynde was diagnosed with cancer,  she dispatched her own call for help, asking long-time, childhood and Facebook friends for support.   The group of women who stepped forward became known as Lynde's Ladies.

"There was always somebody there for her," said Lois Cook.  "They held a fundraiser with a band and a dance and an auction.  She had an incredible amount of support."

"Our dispatchers become a very tight knit group," said Alan Barcelona, president of the California Statewide Law Enforcement Association (CSLEA) which represents CHP dispatchers and  nearly 7,000 other law enforcement, public safety and consumer protection professionals who work for the State of California.   "They share experiences and stresses that are unique to emergency dispatch.  There is sadness in their hearts over Lynde's passing, but they also remember what a vivacious and courageous  person she was, something I hope they can find strength in as they heal from this great loss."

Lynde lived the first 18 years of her life in Ukiah.  She grew up on Robinson Creek Ranch with her four siblings. In school she was active in the marching band and involved in sports. She loved softball. Lynde attended Sacramento State University and remained in Sacramento for several years working and playing in softball leagues and tournaments including several All-State Championships.

While in Sacramento, Lynde joined the National Guard and served overseas during Desert Storm. She enjoyed other cultures and some of her favorite travel memories were of trips to Guatemala, South Africa, and her service time in Saudi Arabia.

Lynde leaves behind a 19 year old son.  Jalen Cook was the best part of Lynde's life, her mother said.  Soon after Jalen was born, Lynde moved back to Ukiah to be closer to family.   She worked at the Ukiah Valley Medical Center as a medical assistant and  then became a dispatcher for CHP where she worked until her medical retirement in 2012.

"I loved her dearly and miss her beautiful smile and her quick wit and laughter," said friend and fellow CHP Dispatcher Joanne Vital.  "She loved her job and was a very dedicated employee.  She would go the extra mile to solve a problem or find information for officers' investigations.  She was a very caring person and a dear friend."

"The outstanding character of hers, she was always smiling," said Lois Cook.  "She kept her sense of humor.  She was cheerful.  She made other people feel good when she felt bad.  She fought hard."

In addition to her son, Jalen,  Lynde is survived by her mother, Lois Cook of Ukiah, sisters Rhoby Cook of Hoopa,  Kristy Cook of Takoma Park, MD, and brother Kirby Cook of Hamilton, MT. She was predeceased by her father, Waldo Cook, and brother, Randy Cook.

Memorial donations may be made to the Ukiah Cancer Resource Center at 590 S. Dora Street in Ukiah, the National Foundation for Cancer Research, or the Lynde C. Cook Memorial Athletic Scholarship through Ukiah High School.