When the California Statewide Law Enforcement Association (CSLEA) supported Proposition 35, it took a stand against human trafficking, but the fight to stop master-manipulating pimps who make big bucks at the expense of young girls and boys is far from over.

Just as Californians Against Slavery (CAS) lead the effort with its "Vote Yes on 35 Stop Human Trafficking in California" campaign, its affiliate,  CAS Research & Education (CASRE) is leading the way in a preventative approach.

"We want to get to the child before the child becomes a victim," said CASRE Program Director Rosario Dowling.  "Sixty percent of our kids being exploited were foster kids.  We want to restore the value of childhood.  The kids are targeted because they need attention, they want attention."

CASRE is combating human trafficking two ways, by training law enforcement officers to use Proposition 35 and by addressing foster care placement.  Dowling  believes a faith-based community in support of foster care is a successful approach.   "States that have faith-based initiatives or communities have fewer foster kids, " she said. 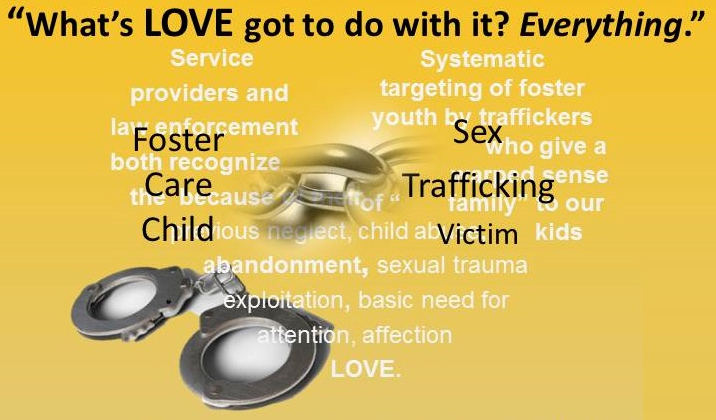 On January 25, 2014 Dowling  hoped to reach out to Sacramento area pastors and ministers with a presentation called  'The H.O.P.E. Model For Churches' from  2:00 p.m. to 4:00 p.m.  She sent information out to hundreds of churches about the  presentation but not one church leader or representative attended.

"It's a long journey," admitted CASRE's Eva Delaney.  "We talk to small groups of people and reach a few at a time."

CASRE is calling on healthy families to combat human trafficking by taking care of a child in  need through foster care  or adoption.  CASRE is also calling on churches to lead the way by providing a support system through faith, prayer and activities.  The H.O.P.E. program is a way for congregations to build a long-term culture of caring for faster care children and orphans in their communities.   It focuses on recruiting healthy families and keeping them healthy through small group and prayer support.

"It is deplorable what is happening to these young boys and girls and even more so that few citizens want to help," said CSLEA President Alan Barcelona.  "Our CSLEA members in law enforcement are doing what they can with the resources available to them, but sadly, it is not enough.   Last February special agents with the Department of Justice arrested five men and one woman, all charged with conspiracy of pimping in an international sex or human trafficking ring.  This was a case where young women were being sold for sex in houses in Stockton, Sacramento, Chico, Yuba City and Fairfield.  They moved the young women from house to house like they were merchandise."

Court documents pointed to a network of brothels in the central valley in which the human trafficking ring leaders would bring women from Mexico to work as prostitutes and move them from house to house.  It is suspected the five people charged shopped for customers by passing  out business cards at a home improvement store and swap meets.  Forty dollars for 15 minutes of sex.

"I applaud CASRE's efforts to protect kids at risk by reaching out to church communities and healthy families who might find it in their hearts to help a child, to protect a child, to lead the way for a child who might otherwise fall victim to ruthless pimps who call themselves 'family' and force these kids  into sex trafficking."