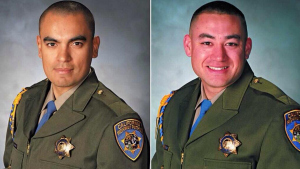 "There was an amazing outpouring of support.  Members of the public, who were standing on the freeway overpasses, saluted and waved to any officer they saw driving on the freeway." - Rob Pickett, RPPOA Treasurer

On Monday, February 24, 2014, more than 2,500 people, most of them law enforcement officers, gathered at The Save Mart Center in Fresno to pay their respects to two dedicated California Highway Patrol officers who died while responding to an accident on Highway 99.

Officers Brian Law, 34,  and Juan Gonzalez, 33, died February 17 while travelling in the same patrol car to a vehicle accident in Kingsburg.  Their patrol car veered off the road in an apparent effort to avoid a pedestrian involved in the original crash.

"We are deeply grateful to the law enforcement officers and the citizens for the outpouring of love, prayers, respect and support for the family, friends and colleagues of these two officers who devoted  their lives to protecting others," said Alan Barcelona, president of the California Statewide Law Enforcement Association (CSLEA).

CSLEA Member, Resource Protection Peace Officers Association (RPPOA)Treasurer and State Park Peace Officer  Rob Pickett was one of the thousands of peace officers who attended the service.  "There was an amazing outpouring of support from other law enforcement agencies from all over the state, as well as agencies from out of state, like the Nevada Highway Patrol," said Pickett.  "Following the service, on the way out of town, I was taken aback by the show of support of city workers and members of the public who were standing on freeway overpasses and saluted and waved to any officer they saw driving on the freeway." 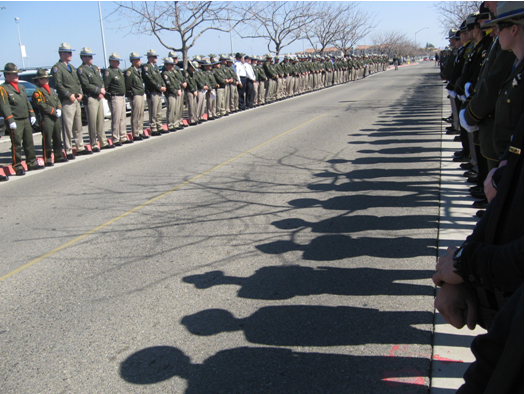 Members of the public were equally touched by the large line of officers who stood at attention on both sides of the street and saluted as their fallen colleagues passed by in a procession led by two hearses and  CHP cars with lights flashing.