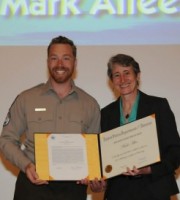 On May 8, 2014, CSLEA Member & CCC Conservationist Mark Allee received a Citizen's Award For Bravery at the Department of the Interior's 69th Honor Awards Convocation in Washington, D.C.

Allee received the award for his heroic attempt  to save the lives of two hikers swept away by a powerful waterfall in Yosemite National Park in June 2011.

"Mark Allee demonstrated selfless courage in an attempt to save the lives of two people he didn't know," said CSLEA President Alan Barcelona.   "What he did, was beyond brave and we are proud that our association consists of members, like Mark, who are committed to public safety.  We thank Mark for his continued service to the State of California, its citizens and its visitors."

On June 29, 2011, following an unseasonal and  tremendous rain storm, Allee hiked to the Wapama Falls Bridge to inspect trail conditions.  Wapama Falls is a powerful waterfall in Yosemite National Park and following two inches of rainfall in 14 hours, it was flowing so ferociously, it created its own super-strength winds. Huge bursts of water were wildly tossed onto the bridge, submerging the access trail and steps.

When Allee became aware of five backpackers approaching  the bridge from the opposite side of his location, he frantically signaled for them to stop.  Due to the noise and commotion of the waterfall, his attempts to communicate with  them went unnoticed.  As the hikers began  to cross the bridge, the first two were forcefully  knocked to their knees and immediately in a life-threatening, and ultimately like-taking situation.   Allee got to a boulder downstream in an attempt to rescue them.  One hiker immediately disappeared into the flow of water, the second was caught up in a bridge rail.  Allee yelled for the remaining hikers, including the fallen hiker's wife, to retreat to safer ground.   In a valiant and life-saving effort, Allee was able to free the threatened hiker from the rain poncho he was wearing and then his backpack, both of which threatened to drag the hiker beneath the water and were quickly carried  away with the current.  Allee yelled for the hiker to grab the trust.  The hiker became exhausted and was swept away.

Despite the loss of two lives, the survivors described Allee's actions as heroic.  They commended his training, strength and courage.  Congress recognized his bravery several months later.

"I do not believe that we act courageously to gain recognition, I believe we act courageously because it is the right thing to do," said Allee.  "For whatever reason, sometimes we are called upon to act in an extraordinary way. I hope that when that day comes we all have the training , the willingness, and the faith to answer the call and if the measure of a days work is that two little girls still have a mom to come home to, then that was a good day." 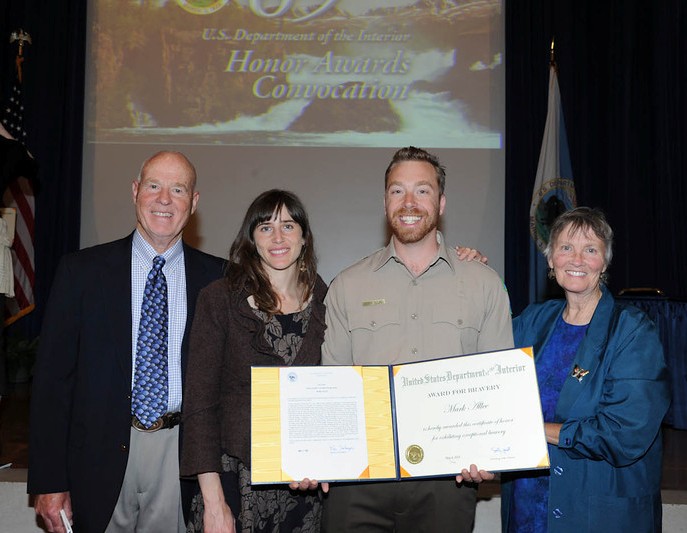 Pictured with Mark is his father Brian Allee, his mother Kathy Rile and his girlfriend Dulce Ziegler