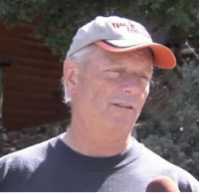 We fist told you about State Park Ranger and California Statewide Law Enforcement Association (CSLEA) member Robert Peek in April of last year when he and his wife were awoken by a loud pop  in their Idyllwild home at  2:30 a.m. Easter Sunday.   He thought it was gunfire.  "It sounded just like a gunshot, like the gun I use for work," said Peek.  But suddenly he noticed a huge glow in his bedroom.   A look outside and he saw flames, 20 feet high, shooting  up from his neighbor's home across the street.

What Peek did next is considered life-saving and that heroic act is why he was recently chosen by California State Parks Director Major General Anthony L. Jackson, USMC (Ret.) to receive a Special Acts award at the annual Director's Recognition Awards in Sacramento.

"We were extremely proud of Ranger Peek when we learned of his life-saving actions last year and are equally as proud as he is honored by the director of State Parks," said CSLEA President Alan Barcelona.

When Peek investigated the popping sound and orange glow that Easter morning, a quick glance at his neighbor's driveway told him  all he needed to know.  His neighbor Paul Colucci's  was home on fire and Colucci was more than  likely asleep inside,  unaware of the fast moving, life-threatening danger.

The off-duty state park ranger raced into action,  running over to his neighbor's house, he  jumped over the rail of the back deck to the back bedroom.  "He was inside, still asleep, I think," said Peek.  "I yelled,  'open the door.'   He kept saying, 'what? what? what?' He was coughing."

Peek yelled to Colucci to move away from the door and then busted through, which was not  an easy task considering Colucci's mattress was against the door.  Peek pulled his neighbor to safety as the fire continued to spread,  but the off-duty ranger's job was not done.   He entrusted the fire victim's care to his wife and raced to put out flames near the home's propane tank.  "If that exploded it would have been like a bomb, a projectile," said Peek.

When firefighters arrived, they faced a three hour battle.  Water pressure in the mountain community was  weak and it took some time for water tenders to respond.  Peek said when he finally returned to check on his neighbor, "He kept hugging me, hugging me and thanking me."

Peek offered his neighbor clothing and his guestroom.  His neighbor accepted the clothing and opted for a pillow and blanket to wait in,  his only possession that survived the fire, his car.  The keys to the car were  lost to the inferno.

Park Ranger Peek returned to his own home and went back to sleep for an hour before heading off to work at Mount San Jacinto State Park.  "Obviously it wasn't just another day," said Ranger Peek.  "I feel good about it.  I went to work knowing he was okay."

Peek said nothing in the police academy or his five years as a state parks peace officer prepared him for the life-risking rescue.  "We're first responders, we're trained for first aid and search and rescues but we know what we are getting into.  This was instinct, I wasn't trained for this."

Another thing he wasn't prepared for was  the lightening speed in which word of his heroic act traveled.  Unbeknownst to Peek, the story spread on news outlets' websites, on Facebook and on YouTube.  His phone lit up with emails and text messages.

Still, Peek went about his day serving the state of California as a state park ranger, something he has proudly done for six  years.  Peek said he is finally living his dream.  Upon high school graduation he set out to become a ranger, but while at Humboldt State, his father encouraged him to pursue a career in banking.  At the age of 53, Peek decided it was time.  He entered the academy and competed with a younger set, some half his age.

Unlike the race of the Easter morning fire rescue, it took some time for Peek to finally make his dream career come true.  As for the rescue, Peek said he is no hero, he just did what he thought he had to.

"It was an act fast, instinct thing that I had to do," said Peek.  "He (my neighbor) was the one asleep."