How Do Cheaters Scam Workers’ Compensation? Let Our Department of Insurance Investigators Count The Ways

Californians receiving Workers' Compensation through fraudulent means should take note, California Department of Insurance (CDI) investigators have focused their well-trained eyes on these suspected felons and their investigations are resulting in arrests, prosecutions, prison-time and retribution.

"Much of the focus has been in Southern California given the sheer number of people and those lying to receive benefits meant to help those who truly need them," said Alan Barcelona, president of the California Statewide Law Enforcement Association (CSLEA).  CSLEA represents CDI investigators, along with nearly 7,000 other law enforcement, public safety and consumer protection professionals who work for the State of California.  "Workers' Compensation fraud is bad for businesses, bad for California and bad for those law-abiding employees who truly need assistance while recovering from a job-related injury.  It costs all of us money."

Rojas claimed he was injured when he fell from the cabin of the crane he was operating. Rojas was later terminated due to poor work performance and approximately two months later filed a workers' compensation claim dated after his termination. According to department investigators, eyewitnesses stated Rojas did not fall from the crane. Rojas' claim was denied as he had not reported any injuries to his employer and the claim was dated four days after he was terminated.

Ortiz's wife (Diana) claimed that she was owed compensation for caring for her husband due to the extent of his limitations. Diana was awarded $150,000 retroactive pay for the care she claimed to have provided since October 2002. An investigation revealed that John Ortiz exaggerated the extent of his limitations and his wife had not provided any of the services claimed. The couple is  being prosecuted by the Los Angeles County District Attorney's Office.

The total dollar loss associated with this fraud was $357,536. If convicted the couple faces jail time and $57,857.35 in restitution.
Gelacio Martinez Perez aka Gelacio Martinez, 45, of Los Angeles

Buckner is accused of submitting  documents that inflated mileage for physical therapy and doctor visits since 2004 by more than $25,000. CDI detectives and United States Postal Service Office of Inspector General Special Agents conducted a joint investigation that led to Buckner's arrest. Buckner faces up to five years in state prison and a fine. He will be prosecuted by the Los Angeles District Attorney's Office.

Flores  has been charged with workers' compensation fraud for his alleged role in defrauding his insurance company out of more than $61,000. Flores was an assistant distribution center manager who allegedly sustained a lower back and neck injury on December 16, 2011, while employed by Natural Balance Foods, Inc. Flores claimed he was injured while operating a scissor lift during his shift. The investigation revealed that Flores knowingly misrepresented his physical capabilities and limitations. 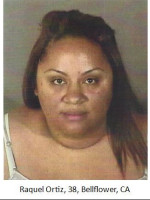 Ortiz allegedly falsified a work-related injury she obtained when employed as a caretaker. Ortiz received more than $63,000 in temporary disability benefits during the time she was supposedly injured. The department's investigation revealed that Ortiz never rendered the services she claimed, and in fact she submitted a fraudulent "Application and Permit for Disposition of Human Remains" to collaborate her story. Additionally Ortiz is accused of perjuring  herself at her deposition hearing. She was booked in the Los Angeles County Inmate Reception Center and will be prosecuted by the Los Angeles District Attorney's Office.

Ordonez, a warehouse supervisor, claimed he suffered  continuous trauma injuries to multiple body parts due to repetitive heavy lifting. Ordonez received more than $46,000 in benefits and paid expenses due to his alleged misrepresentation regarding his physical capabilities. The investigation revealed that Ordonez was working as a tax preparer while receiving workers' compensation benefits; however he had not reported any income to his insurer. The Los Angeles County District Attorney's Office filed multiple felony charges for insurance fraud.