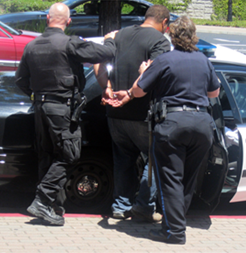 When investigators with the Contractors State License Board's (CSLB) Statewide Investigative Fraud Team (SWIFT) set up at shop in Belmont  May 22, 2014, they posed as commercial property owners taking bids for paint, drywall and floor work.    By  the end of their nine-hour sting, they arrested 12 people suspected on contracting without a license.

One suspect,  an East Palo Alto man posing as a licensed contractor, was cited by CSLB and then transported to San Mateo County Jail on an unrelated $5,000 warrant for driving with a suspended license.

"It's just too risky to hire someone who doesn't have a State contractor's license," said Alan Barcelona, president of the California Statewide Law Enforcement Association (CSLEA) which represents CSLB investigators.  "There are plenty of people out there ready to take your money, and you trust they'll do a good job, but you have little recourse if they're unlicensed.  These investigators are working to protect unsuspecting consumers from that type of harm."

All 12 suspects were cited for contracting without a license.    In California, all home improvement jobs valued at $500 or more (combined labor and material costs) must be conducted by a company or person with a CSLB-issued license.

In addition, 10 of the 12 suspects were cited on a misdemeanor charge of illegal. State law requires contractors to place their license number on all print, broadcast, and online advertisements. Those without a license can advertise for jobs valued at less than $500, but the ad must state that they are not a licensed contractor.

Officers with the Belmont Police Department and the San Mateo County District Attorney's Office assisted in the sting.